Legislative Decree n. 51 of April 4, 2002 has amended the single text on immigration by introducing a control on the part of the judiciary over measures ordering the accompaniment to the national border of foreigners with the use of public force. The intent was to implement the well-known ruling n. 105/01 handed down by the Constitutional Court, and to guarantee observance of Art. 13 of the Constitution, inasmuch as forcible accompaniment is a measure bearing on personal freedom. In its original formulation the decree provided for the assignment of the power of validation to the Public Prosecutor responsible for that particular territory, although that figure offers no guarantee of an impartial third party typical of a truly jurisdictional organ. This unfortunate aspect was corrected at the time of conversion into law with Law n. 106 of June 7, 2002, whereby the power of validation was duly assigned to monocratic tribunals. Other doubts remain. What appears particularly unsatisfactory is the provision for the immediate enforceability of an order for accompaniment to the national border effective prior to the validation ruling itself. The result is not only a violation of the foreigner's right to self-defence before the judge, but also a violation of reserved jurisdiction pursuant to Art. 13 of the Constitution, as well as of the principles contained in the new Art. 111 of the Constitution, with particular reference to the right to cross-examination as an objective requirement for a fair trail. It is in fact difficult to imagine that such guarantees can be said to be safeguarded when the judge is called upon to pronounce judgement without being able to have an exact knowledge of the facts that form the object of the controversy, for the simple reason that it will be impossible for the directly interested party to receive a hearing. This is the basis of the potential unconstitutionality of the decree converted into law with Law 106/02. 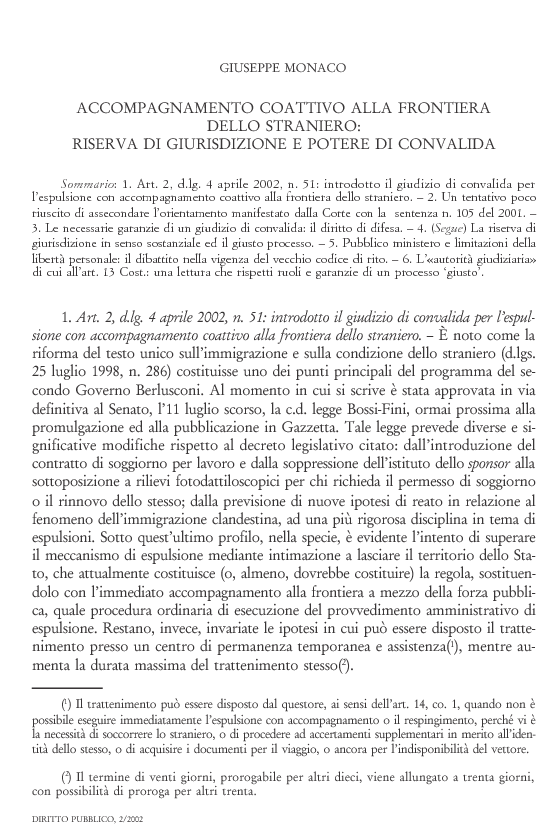