The author analyses the theme of normative and administrative competencies in the area of cultural assets and activities subsequent to the reform of Title V, Section II of the Constitution effected by the law known as l.cost. n. 3/2001, which caused a complete rearrangement of the relationship involving the State, the Regions and local government institutions in all matters of intervention by the public authorities. The dynamics of the fundamental principles contained in the Constitution from the time of its birth, directly or indirectly relating to the safeguarding and enhancement of the historic and artistic heritage, and the promotion of cultural activities, points out the presence of a constitutional model which right from the start was already concerned with recognising an active role to local autonomy in this sector. Today this is bolstered by the assignment of a general administrative competence to the Communes (municipalities) and of a broad, articulated normative competence to the Regions. Within this framework, the author dedicates special attention to the division of the normative competencies in the specific area of cultural assets, which is the most important in both technical and normative terms, in addition to being the most problematic from the standpoint of its definition and of its relationship with contiguous sectors. Unlike with enhancement and promotion, in this matter the recent reform preserves the characteristics of the original constitutional model, which assigns a predominant legislative competence to the State (national) level, along with a wholly marginal, merely eventual role assigned to the Regions (through the new instrument of so-called "differentiated regionalism"), without reaching a definition of the functions contained therein, and failing to take into account the more innovative, albeit general and indirect, direction provided by constitutional jurisprudence in previous pronouncements. While awaiting news of the necessary measure for implementation of a reform as far-reaching as it complex, and at times controversial, attention is focused on the long-standing opposing viewpoints of those in scholarly circles who have always defending the "monopolistic" position of the central government in the area of the safeguarding of the heritage under discussion in view of an overriding unitary national public interest, therefore considered indivisible; and of those who on the contrary champion a more active role for the Regions through the assignment - albeit partial - of certain normative competencies, consonant with a context objectively different from the past and based on the proven, consolidated administrative and legislative experience of these territorial institutions, including in the delicate matter of the protection of cultural assets. 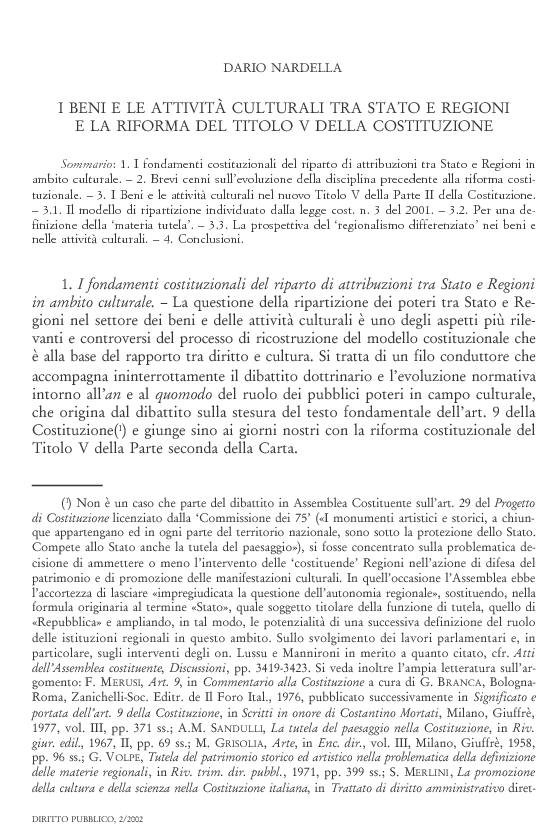