The author deals with the theme of the subsidiarity State with reference to the matter of education. He observes that the set of problems concerning the "subsidiarity State" requires among other things investigation by sector, with education being of particular interest, especially in view of recent and very recent normative changes (in ordinary legislation and constitutional legislation). The relation between the role of public authorities and freedoms or demands of individual or associated citizens is reconsidered, in these notes, on the basis of a preliminary description of the essential lines of the system resulting from ordinary legislation, and proceeds to a comparison with the model inscribed in the text of the Constitution. The author emphasises, in contrast with a different and widespread way of understanding (and of feeling), that this matter, as others, is marked by sluggish, unsatisfactory constitutional fulfilment (the parity of "non-state" schools disciplined by Law No. 62/2000). This has contributed to reducing the perception and use of the Constitution as a juridical text and, in the sector of interest here, to not being prepared to find adequate solutions in timely fashion. From this standpoint the theme of education is truly ... educational. Through analysis of the educational system resulting from ordinary legislation the author observes that if the principle of subsidiarity means that the Republic can be substituted by others (individual private citizens, associated private citizens, private citizens operating for profit, private citizens not operating for profit and others) in the activity of providing direction for and regulation of state education, then there is no room for the principle of subsidiarity. If it means that the Republic finances public education by attributing an identical role (including funding) to schools having an exclusive ideological orientation and to schools with an open ideological bent, once again there is no room for it. If, instead, the principle of subsidiarity means that a school having a closed ideological bent can confer, on certain conditions (but without public funding), diplomas or certificates attesting to successful completion of a course of studies identical to diplomas and the like conferred by the public education system, then there is room for it, as there always has been. However, what is involved in this case is not the principle of subsidiarity, but an exception. Finally, if the principle of subsidiarity means "citizenship" in the public education system for a non-public school that guarantees instruction with an open ideological environment and academic freedom, then that would be a triumph of meaning over words, and of publicity as a rule over publicity as a subject (which publicity, in the absence of such rule, could not take shape). 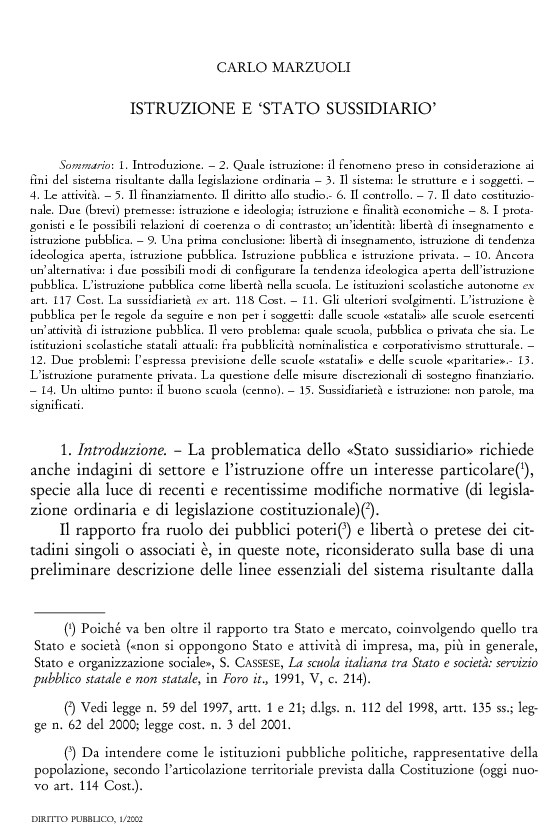