The author tackles the theme of the subsidiary State in the area of social services through an analysis of constitutional and legislative norms on the subject. The matter occasions much reflection and, as regards the standpoint of the principle of subsidiarity, the situation described testifies yet once again to the existence of a situation characterised by intermingling and trade-offs between public and private where there is no precise definition of the role of either one. For the purpose of such delimitation the principle of subsidiarity does not appear able to offer any solution or prospect for elaboration of the problems described, which is to say that it is unable to formulate hypotheses, much less directives in the subject matter about which tasks ought to be a public responsibility and which left up to private forces, and what protection ought to be guaranteed by whom for the benefit of whom. Instead, a consideration of the matter from this standpoint does bring out how a clear definition of public activities in this sector, too, is not a residual element, but rather a necessary premise in order to recognise to private subjects their right to be present in the field. This reflection in turn leads to the pointing out of an unresolved fundamental difficulty in the approach itself to the principle of subsidiarity, the point being that public activities and private activities are not homogeneous and therefor interchangeable among themselves on the basis of a criterion of greater efficiency or adequacy or something else. In reality, such activities do not express the same initial situations, nor do they present the same characteristics. Only with difficulty is it possible to view a private activity as destined to guarantee to anyone needing it the performance of a given basic service, much less as being fit to define what ought to be the basic services guaranteed to every member of the community. It is even more difficult to view a public activity as being an expression of freedom of thought or of religion. The conclusion that imposes itself is clear: the principle of subsidiarity applied in absolute terms, so to speak, meaning not only for eventual public activities, as occurs in relation to the Community system which explicitly excludes the application thereof in those sectors of the Community's "exclusive competence" ((Article 7 of the EC Treaty), but for any activity whatsoever, as the final paragraph of the new constitutional Article 118 seems to do, is inadequate for the purpose of determining the role attributed to public subjects part of a given community. Thus, it turns out to fail to recognise just what it would hope to guarantee, which is to say that an individual and a community are not one and the same. Vice-versa, it is just the recognition of the specificity of each that requires that a clear definition be made as to the degree of self-responsibility that the community requires of its components and what type of solidarity it offers them. And the working out of this definition is a task that cannot be performed by anything other than through a general system of rules and regulations. 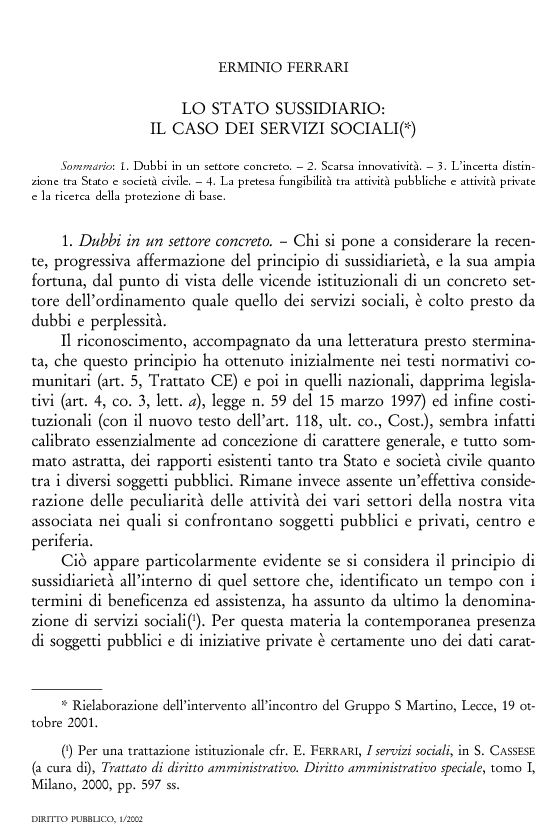