The work sets out to analyse the discipline of the form of government contained in the new Statute of the Region of Tuscany, approved by second resolution on 19 July 2004 and presently being examined by the Constitutional Court following a legal challenge by the national government pursuant to Article 123 of the Constitution. The lawmakers responsible for the Statute have essentially confirmed the choice (already made their own with Constitutional Law 1/1999, but subject to derogation by the Statute) in favour of the direct election of the President of the Region, in accordance with the 'simul stabunt simul cadent' principle, by virtue of which any reason for the President's cessation of office, including non-political, also causes the dissolution of the Regional Council and therefore the need for new elections to the two organs. This model, which has also been made its own by the only new statute already in force (the Statute of the Region of Puglia) and by all the projects approved at least by first resolution by the respective regional councils, presents risks going beyond 'rigidity' (since it does not allow for any solution in the event of a political crisis other than new elections or a perhaps prolonged institutional stalemate, in the event that the President does not resign or lose a vote of confidence by the Council) to include a possible drift toward demagogy/consensus through plebiscites or, according to the political/political party context, a novel dualism involving the Council (and the majority within it) and President, all to the detriment of the proper functioning of the regional institutions. Therefore, having maintained the direct election system, the new Statute of the Region of Tuscany has tried to introduce certain 'corrective' measures so as to redress the balance between Council and President. However, such measures, as stated in he text, do not appear to suit the purpose, and more than one of them (e.g., the requirement for the President to submit the government programme to a vote by the Council, without, however, an eventual negative vote producing any consequence) has been challenged in the courts by the national government on the ground that they are in violation of Article 122, paragraph 5 of the Constitution. Thus it is that the lawgivers of Tuscany responsible for the statute find themselves placed on a sort of imaginary line marking a middle course that does not completely second the potentialities of the direct election system (since it would have been necessary at least to include in the Statute a provision for providing the President with efficacious instruments for leading the work of the Council), nor does it succeed in re-establishing an effective role for the Council in the fabric of the form of government (which at a minimum would have entailed a robust valorisation of the instruments for direction and control). To this must be added that the decisions reflected in the new Statute have given rise to a provision, in very weak terms, for institutions and bodies that could have been put in a position to act as efficacious correctives to the form of government (Council of Local Governments, an organ for statutory guarantees, institutions for participation, etc.). Finally, increasing perplexity in the regards of a design that does appear clear in terms of outcomes and developments are decisions reflected in the new regional electoral law (l.r. 25/2004), which, if it guarantees a safe majority in the Council to the coalition, linked to the President elected, does not in the least undertake to contain political party fragmentation, which is exactly what in turn risks weakening the overall institutional design. If these are the future uncertainties, those tied to the present are even more serious: in fact, should the Constitutional Court rule that even just some of the contested provisions (over ten in number) are unlawful, the prospect of the imminent end of the legislature would risk nullifying both the statutory Charter and the new electoral law (whose taking effect is subordinate to the taking effect of the Statute, specifically Art. 26) - and that should be reason for serious reflection on the extremely serious delay in fulfilling a fundamental duty which Tuscany (just as the other Regions under ordinary statute) was called on to do at the end of 1999. 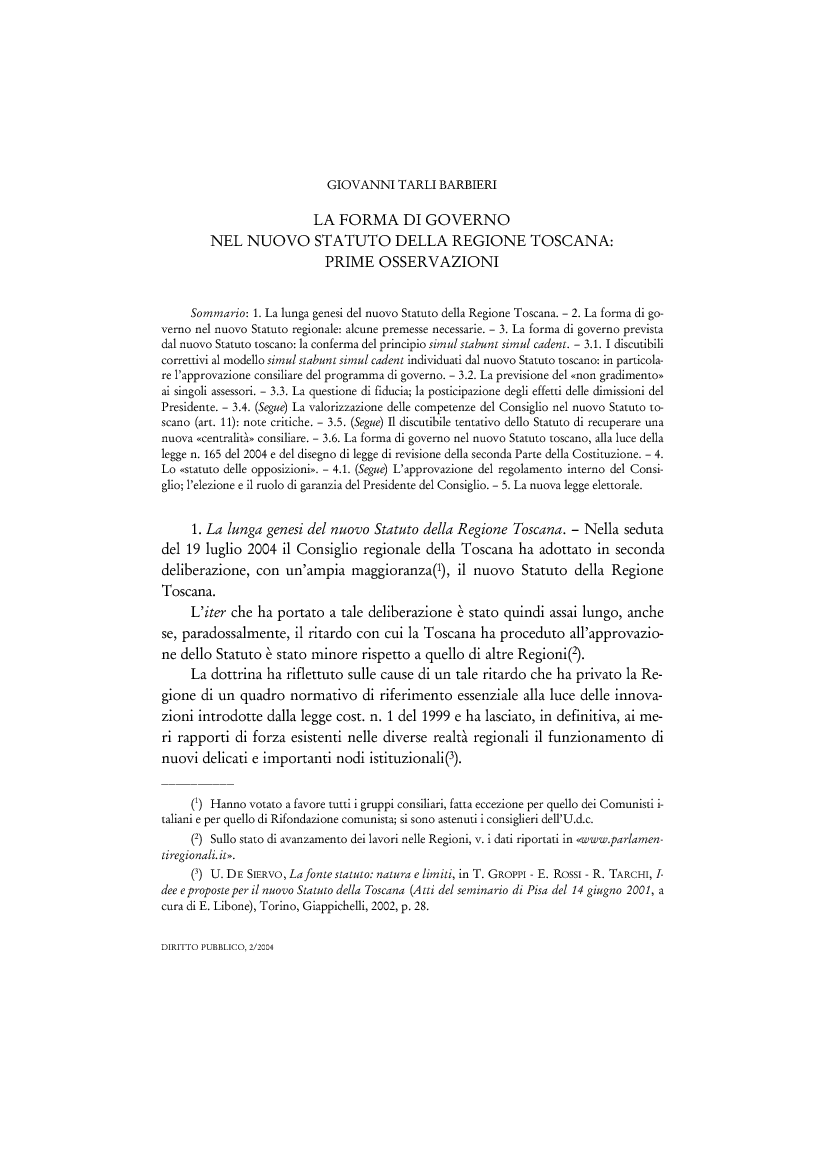