In paying homage to the scholarly work of Eduardo de Enterría, the author stresses one of the mainstays of his reflection that best helps place it in context in the vast movement of theories and ideas that have characterised so-called 'modern' law for more than two centuries: namely, juridical subjectivity, meaning the recognition, to the advantage of all, of authentic subjective rights guaranteed by the law and susceptible to jurisdictional protection (independently of the manner and degree of protection claimed). For his contribution, E. García de Enterría appears deserving of being numbered among those in the great school of classical liberalism. In this context, he went further than most contemporary legal thinkers in defending the ideal of subjectivity: in effect, he recognises to administrators true and proper subjective rights in the regards of the administration, and therefore the State. Nevertheless, all this does not drag him onto the terrain of hyper-subjectivity. To the contrary, particularly in his late publications, one notes his reticence before the prospect of a possible drift of subjectivity as applied to administrative law. In painting this picture, the authors dwells most of all on the theory of subjective rights, concisely reconstructing the origin thereof and highlighting the fact that in his construction the law has played a decisive role: in a certain sense, law is the other side of the freedom conferred on human beings, contributing to making effective this freedom and the subjective rights that it conveys. The author next reconstructs the objectivist theses of law that contested the very category of subjective law, dwelling in particular on the work of L. Duguit. He then goes on to consider in analytical fashion, mainly with reference to the French system, the theory of the subjective rights of administrators - or subjective public rights - which, by linking up with the general theory of subjective rights, introduces an additional dimension that singularly enlarges the field of action: the rights in question in effect correspond to obligations imposed on public persons (which is to say public power), of whom the State (personalised) is the most symbolic juridical expression. The subjectivist conception of the rights of administrators entails a certain number of consequences (which are found throughout E. García de Enterría's work), among which without a doubt is the valorisation of the judge's role. However, the author does not fail to observe how subjectivist reasoning has been weakened by the transformations of the law in the process of the consolidation of the Welfare State under the law, and how the possible development of these theses through the recognition of a subjective right of administrators to the legality of administrative acts or the adoption of the so-called principle of legitimate trust may lead to worrisome hyper-subjectivist excesses. 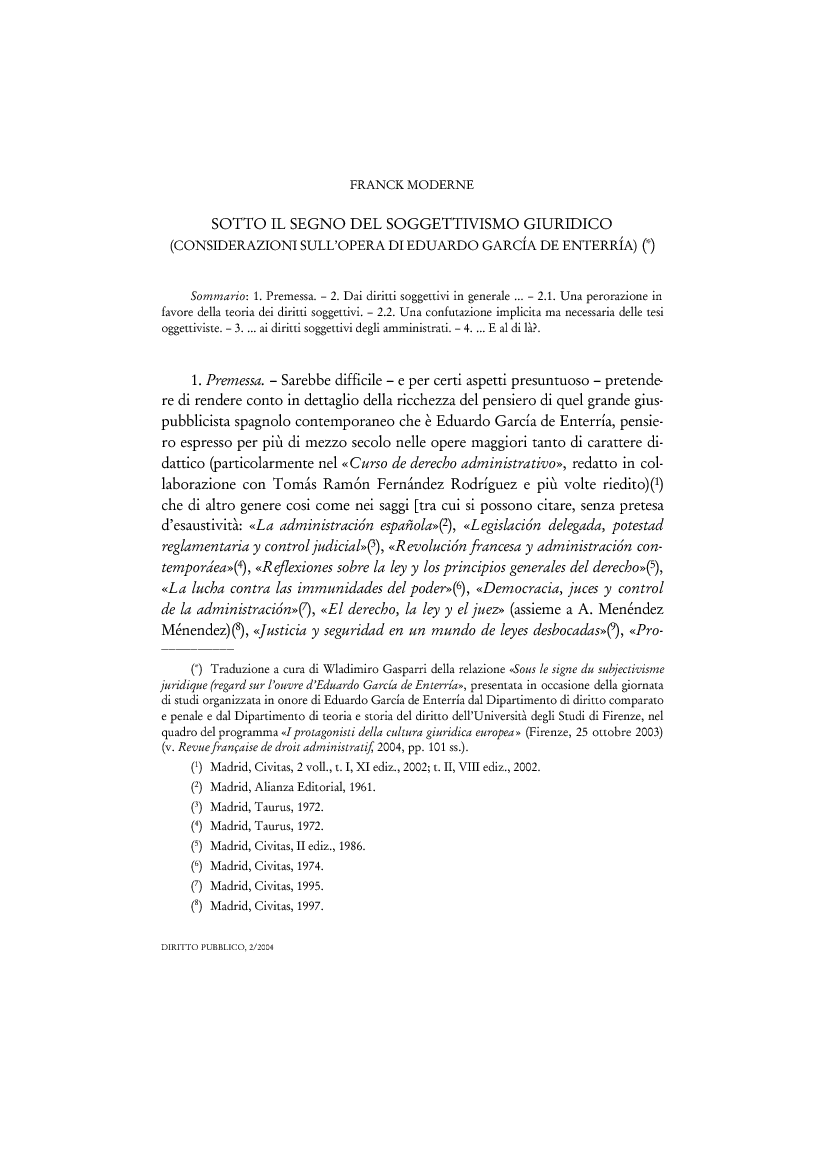