The Rights-State-Territory nexus is one of the most complex theoretical questions in the modern and contemporary legal and political discussion. On this topic, during the Twentieth century the main theoretical perspectives were outlined representing till nowadays the core of the conceptual framework. In this essay the theses of three Italian jurists will be discussed in their essential contribution to the debate, according to different perspectives. In the early 1900s, following the theoretical strand of the Rule of Law, Santi Romano e Tomaso Perassi contributed to define the question, assuming two opposite research perspectives. While Romano considered the Territory as a coessential element of the Modern State experience, Perassi understood the Territory as the scope of validity of a legal system. Later in the second half of the twentieth century, an epistemological turning point occurred: Alberto Predieri reshapes the relation between State and Territory using the concept of Landscape, as form of the country in its entirety, a conceptual tool for the constitutional State to guarantee fundamental rights, promoting the freedom of human development in its ecological and social relationships. The three theses will be discussed in dialectic way, the first two in their antithetic position, the third as synthesis that overcome the assumptions of the previous two. 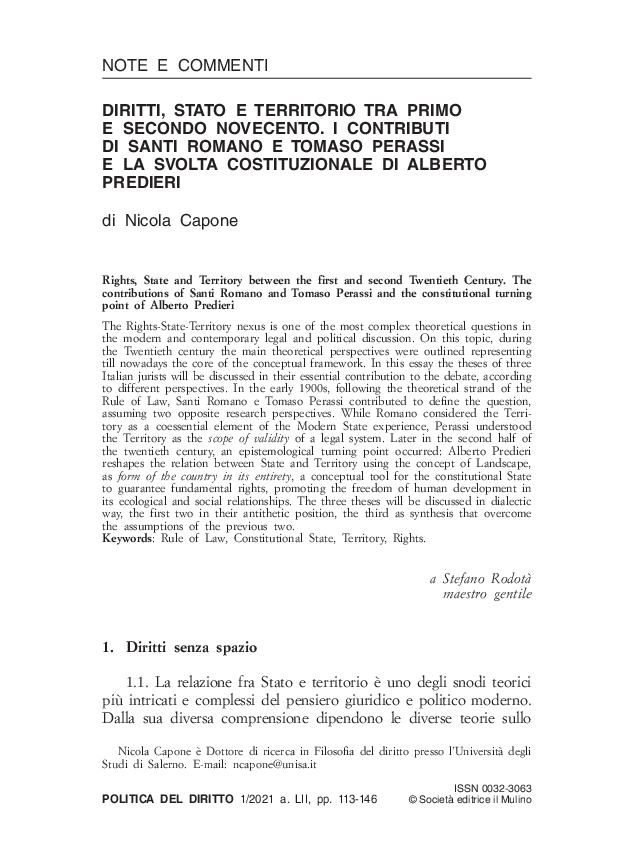