In recent years, the Constitutional Court has been called to express itself on the problematic tension between the material need for places to be used for the exercise of worship (advanced by various confessional organizations) and the needs for land management (raised by the Regions and Municipalities in carrying out their administrative action). We are faced with the difficult identification of a balance between the constitutional right to a religious building, understood as an autonomous dimension of religious freedom, and the urban planning activity, which is an expression of the discretionary exercise of the functions that are attributable to the public authorities. Taking into account the pluralistic and personalistic inspiration of our Constitution, it is to be evaluated in a positive way the declaration of illegitimacy of some regional regulatory provisions, such as in the recent case of Lombard urban planning legislation, aimed at privileging, in a quantitative and institutionalist logic, the religious needs of urban spaces of the «majority religion» or of some confessional groups already strongly rooted and widespread, damaging the legitimate expectations of socially minority religious formations. In the line of thought proposed by the Constitutional Court, the local administrations should undertake to allow (at least in principle) all religious movements to participate in the distribution of spaces and public contributions, so as to pursue a constitutionally correct realization of urban planning purposes and to counteract the possible tendencies towards a political selection of a few confessional interlocutors to be benefited with a treatment of privilege. 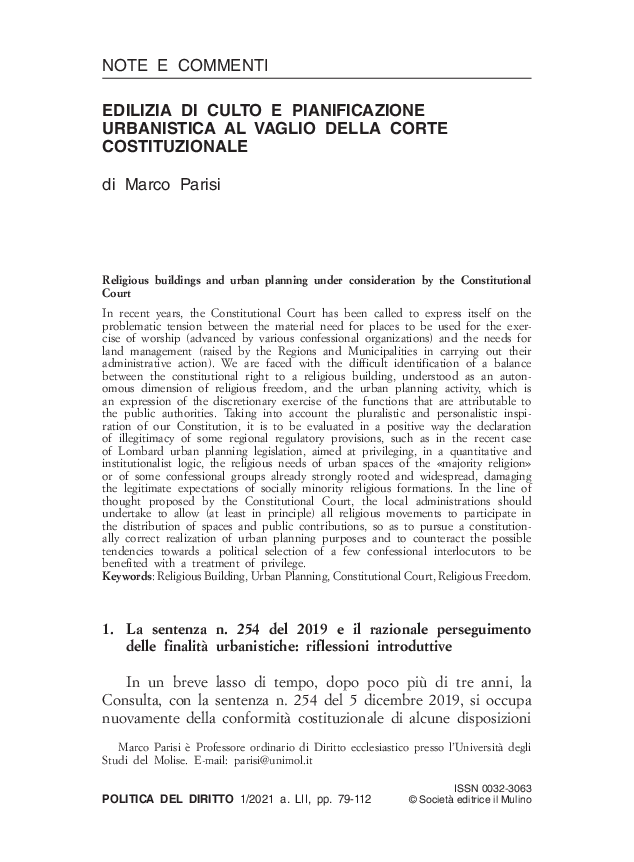