This article is about regional disparities and regional policy in Europe, with a focus on Italy. The point of departure is the persistence of regional inequalities in many European countries, after some fifty years of public policies. In many cases, intra-national regional divergence has actually resumed after the convergence observed in the third quarter of the twentieth century. Why is that? What went wrong? To answer these questions, first the evolution of regional policy in Europe is reviewed, challenging three pillars of the current EU Cohesion policy: the faith in government decentralisation, the «local development governance» paradigm, and the competitive approach. The case of Southern Italy is then presented, as an illustration of both the evolution of regional policy and some failures of Cohesion policy. Subsequently, what was «lost in translation», in the shift from the «national» regional policies of the 1960s and 1970s to the multi-level EU Cohesion policy framework established in the 1990s, is highlighted. It is argued that much has been given up in terms of unitary strategic perspective, financial commitment, and leverage, whereas the «local development policy governance» approach tends to reproduce and enhance regional disparities. Finally, pointers for a renewed policy commitment are proposed. 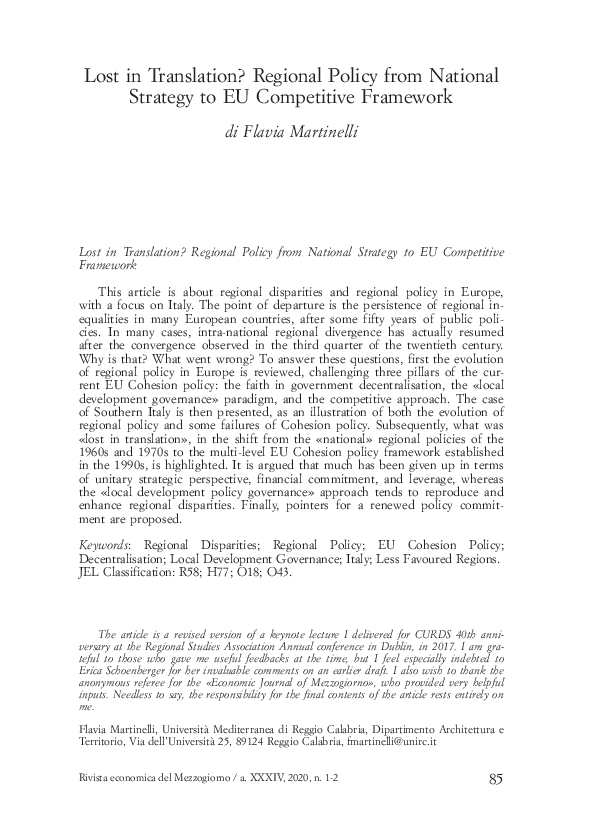