Declined in the context of Southern economy of the first two decades of the XX century, the study of the origin and early evolution of the electricity sector allows to retrace, from a vantage point, the first season of the industrialization of the South, which was inaugurated by the special law of 1904 and by the affirmation of the Nitti's model of industrial start-ups. Great opposition and a number of opportunities for the development of southern energy sector would arise, in the years of the «Great War», due to the dramatic changes, in terms of logistics, caused by the War Economy system. A series of twists and challenges emerges from this paper, that makes the study of the electricity sector particularly interesting, since wide-ranging historical analysis, carried out in terms of path dependence, could allow us to discover crucial passages sometimes neglected in the literature, but important to provide useful insights for those engaged in theoretical work on southern industrialization delay. The seeds painfully sown between the beginning of the twentieth century and the years of the Great War would eventually bear fruit in the following decade, when - to paraphrase Cenzato - one could say that the history of electricity, due to the absence of other major initiatives, became the history of South Italy's industry, and southern Italy had now enough energy to cover the needs of its industrial facilities and its civil life. 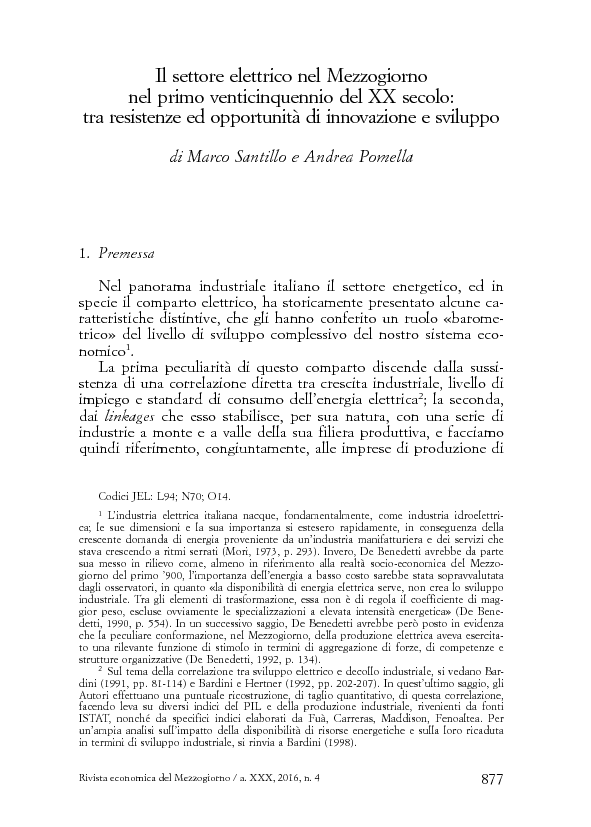