Several European States have started a deep revision of their structures of local government in an attempt to strengthen the involvement of cities and local agencies in the Eu policy-making process. This reform process, however, in some cases, has not followed the principles of local democracy suggested (in 2012) by the Council of Europe and has not taken into account the real needs of citizens in the use of public services. In Italy, for example, it was driven exclusively by an unjustified obsession to achieve, at any price, a reduction of public expenditure. This obsession has marked the beginning of a real trend reversal with respect to the phase of enhancing the role of local governments, which started in the 90s and continued, without any particular problems, until the XVI legislature. The natural outcome of this new reform phase is represented by the so called «Delrio Act» and the recent attempted revision of the Constitution, which received a sonorous rejection by the electorate and which now threatens to scupper the whole reform project of the local Autonomies. This paper addresses some topics aimed at highlighting the critical issues of the aforementioned reform project. In particular, the paper analyses the issue of the recent unsuccessful attempt to revise the Italian Constitution and its consequences from a legal, economic and financial point of view. A special section analyses, in terms of resources and their adequacy (with respect to the public services), the crucial issue of financial sustainability and the overall resilience of the current financing system of local agencies for the government of extended areas. 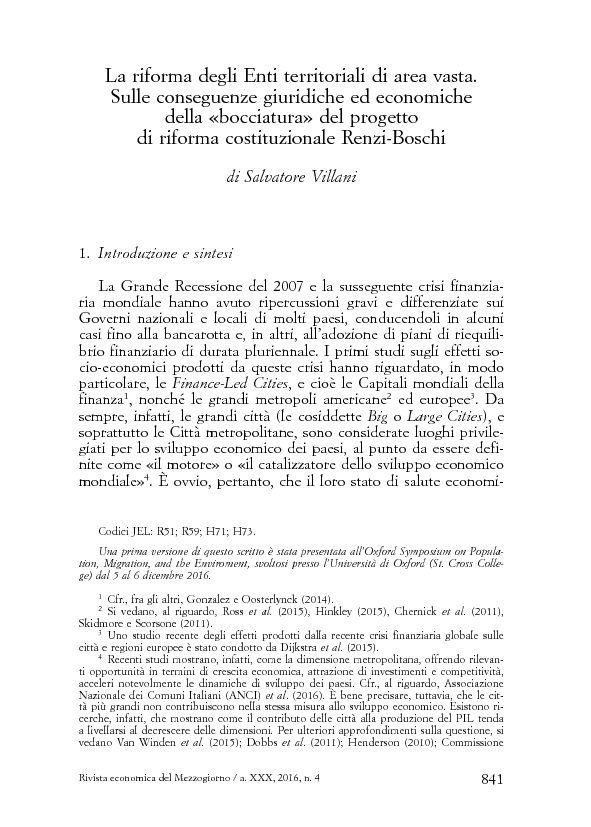