Over the last years the concept of creativity has played a key role in the economic literature related to factors of local development. The main contributions presented in this literature have focused their attention both on the definition of creativity and on the identification of the members of creativity class. This defining effort has generated considerable criticism, above all due to several aspects in its definition as well as to the difficulties emerging in its measurement. Nevertheless, many empiric contributions have been proposed in order to analyze the geography of creativity in Italy. Following an idea proposed by Santagata (2007), the majority of these studies have analyzed the geographical distribution of some industries including those sectors that can be defined as creative according to the different related theoretical definitions. Other scholars (Tinagli and Florida, 2005) have tried to analyze the localization of those who can be part of the creativity class owing to their jobs (occupational approach). This paper aims at contributing to this last area of research. In order to overcome the vagueness featuring a too broad concept of creativity class, this paper proposes the analysis of individuals that can be defined creative "erga omnes", that is the artists. More precisely, this paper defines three indicators useful to measure the presence of artists, their income and their activity. The results confirm the existence of dualism between southern regions and central and northern Italy's regions; in addition, the localization choices of artists seem to be associated mainly with the economic opportunity of territories. 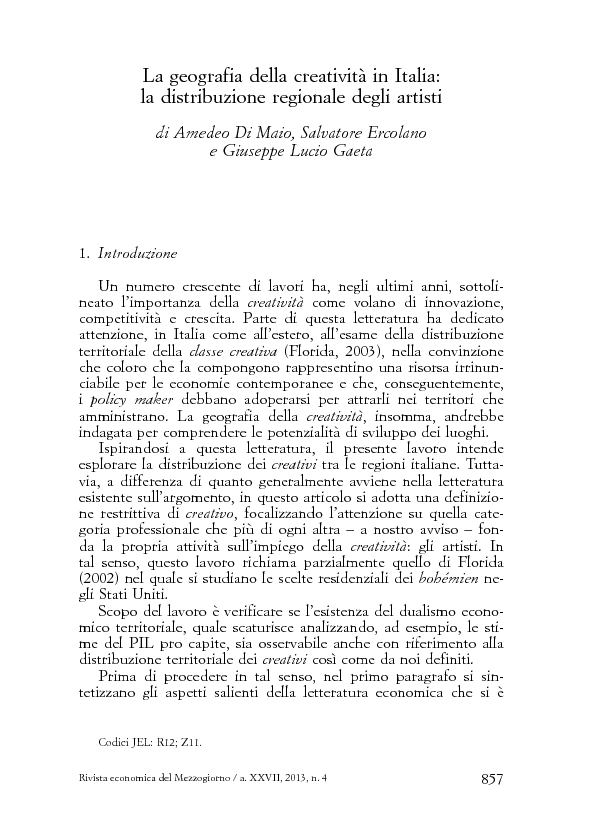