This paper analyzes the taxation policies of Italian Municipalities during the period 2007-2012. It attempts, in particular, to examine to what extent the financial decisions of these governing bodies were affected by the reforming process, still in progress, of the funding system of local authorities and by the difficult macroeconomic environment which has progressively reduced, during the period considered, the competitiveness of Italian economy. The analysis carried out in this paper has shown that, in all three districts taken into consideration (North of Italy, Central Italy and Southern Italy), the tax burden (that is the ratio between tax revenues and GDP) has increased. However, while in the Central Italy and in the Mezzogiorno the relationship between municipal tax revenues per capita and the (logarithm of) GDP per capita is growing, in the richest areas of the country, namely in the North of Italy, the same relationship is decreasing. These developments are to be traced back primarily to two factors, which we have reported several times in the past: on the one hand, the pressure of citizens' needs, produced by the underfunding of the Mezzogiorno's municipalities in the services corresponding to the ELP (Essential Levels of Performance); on the other hand, the conceptual, technical and financial poverty of the equalization mechanisms in place, ineffective in ensuring an at least approximate equality between the tax burden borne by taxpayers and the return which they obtained in terms of services. 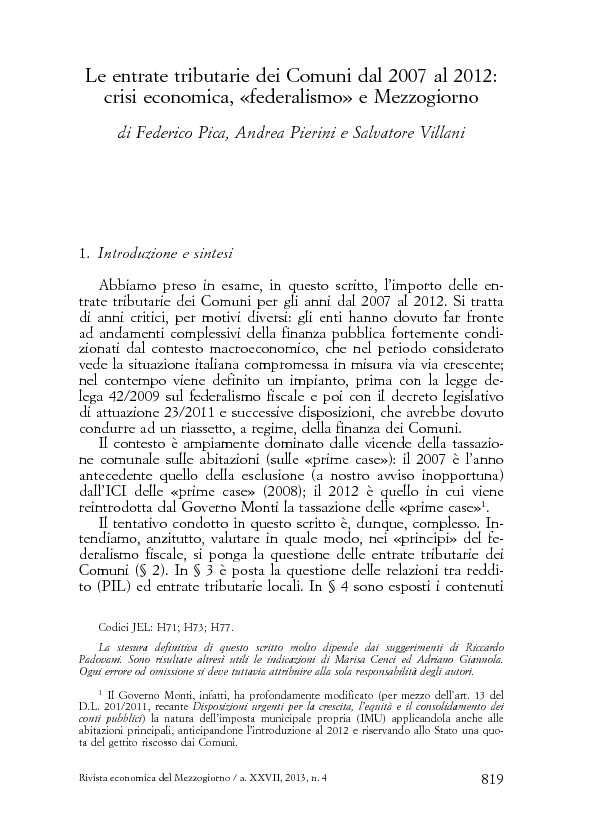