The aim of the paper is to make an evaluation of the most important incentive law of Italian regional policy, the incentive scheme provided by the Law 488/1992, after a decade of effectiveness and action, and with regard to an almost finished phase, after the passing, in 2005, of the reform which deeply reviewed its structure. The literature concerning the main contributions aiming at verifying the "effects" of the law and pointing out intervention's strength and weakness is reviewed. Then, on the basis of the available data and information over a decade (1996-2005), some features concerning the achievement of the specific policy objectives of adequacy and innovation of Southern productive system, which the law 488/1992 and, more generally, regional incentive schemes on the whole should set, are investigated. The paper ends with some remarks on the possible effects of the recent reform and perspectives on the future of the intervention. The aid regime planned by the Law 488/1992 has come due at the end of 2006 and, in order to carry on during the planning period 2007-2013, it has to be authorized by the European Union; it will be necessary to opt for proposing again this incentive scheme, adapting it to the new regulations about regional aid, or modifying it by appropriate amendments, or abolish it and introduce a new intervention. Finally, the analysis considers desirable the possibility of modifying facilitation of the Law 488/1992 or replacing it with a new intervention. The main point is that, at the end of a possible phase of transition, you can design a not generalized but "selective" intervention, addressed above all to the industry, and aimed at modifying some structural features of Southern production machinery. 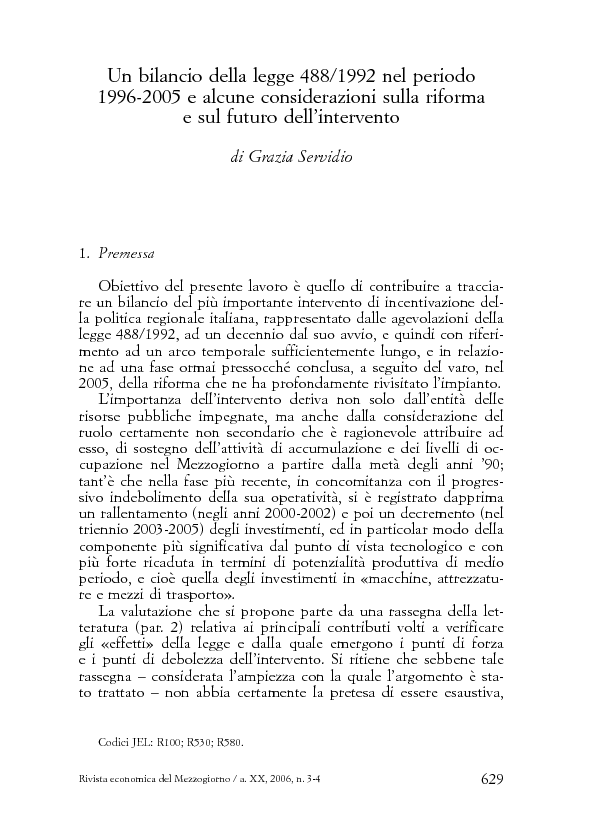