Is the cost of living different in different parts of the Country? If you live in Milan, in the city center, you will certainly realize that the cost of living is higher than that of other parts of Italy, including the South. If this phenomenon is inferred to the whole of the Central and North Italy, a reduction in the purchasing power of the salaries of citizens residing in the area can be deduced; and consequently, an equal increase for citizens of the South/Islands. Therefore, as a matter of fairness, the wages paid in the South should be reduced proportionally. This is the thesis of some. In this paper we focus on this aspect to show that the assumption of a lower cost of living in the South supported by many researchers is questionable. Talking about territorial differences in the level of prices means demonstrating that people have better living conditions in a part of the Country because, with the same resources, what is paid to them is worth more. This work attempts to assess how much the «shadow costs» due to the lack, and often also the absence, of public services, affect the level of consumer prices. The processing of data mainly provided by ISTAT, and by other bodies of the National Statistical System, seem to outline an overall convergence of the actual North/South cost of living. 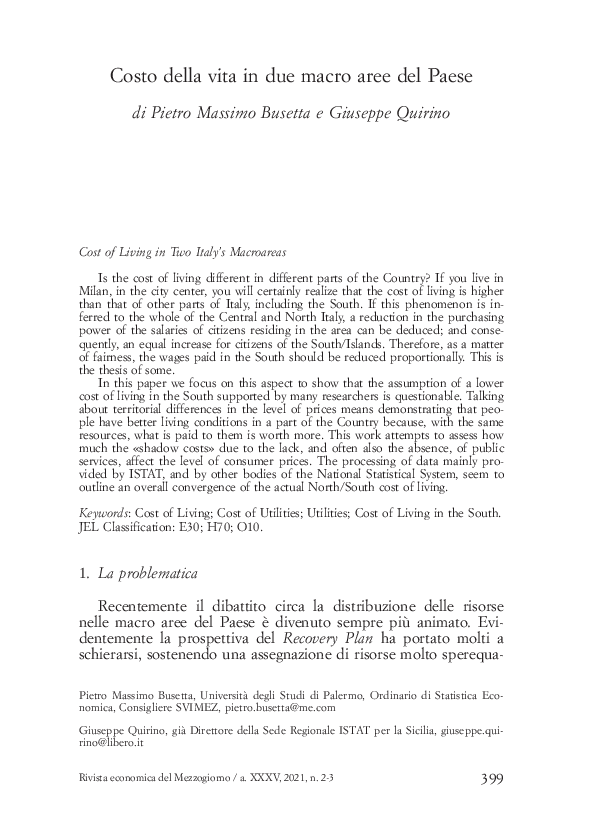