The difference between men’s and women’s earning is the result of social and economic factors. Since little research has been carried out to date to explore the gender pay gap in the various macro-areas of Italy, this work aims to contribute to such issue, with particular attention to the beginning of graduates’ careers. We have observed that there is a wage differential in the South, by checking for the different probability of access to the labour market between men and women, as it may affect the gap. We have used the Survey on the professional integration of graduates, conducted by ISTAT in 2015, which investigated the transition of graduates from University to employment four years after graduation. By estimating the Mincerian equation of wages, we have distinguished between southern Italian graduates and other graduates. Furthermore, we have explored the gender pay gap using the Oaxaca-Blinder decomposition and have applied the Heckman correction to take into account the different probability of female participation in the labour market. Heckman’s two-step procedure allows us to consider sample selection and inverse Mills ratio. The results show that being a woman significantly reduces wages especially in southern regions. Furthermore, it would seem at first sight that the 10% wage gap is mainly due to the discrimination effect also in the South. Subsequently, correcting for the probability of participating in the labour market, the wage gap appears to be not significant for the South (4%). Therefore, it would seem that if participation in the labour market were the same for men and women, the gender pay gap, for those who live in the South, would not be very relevant or significant. 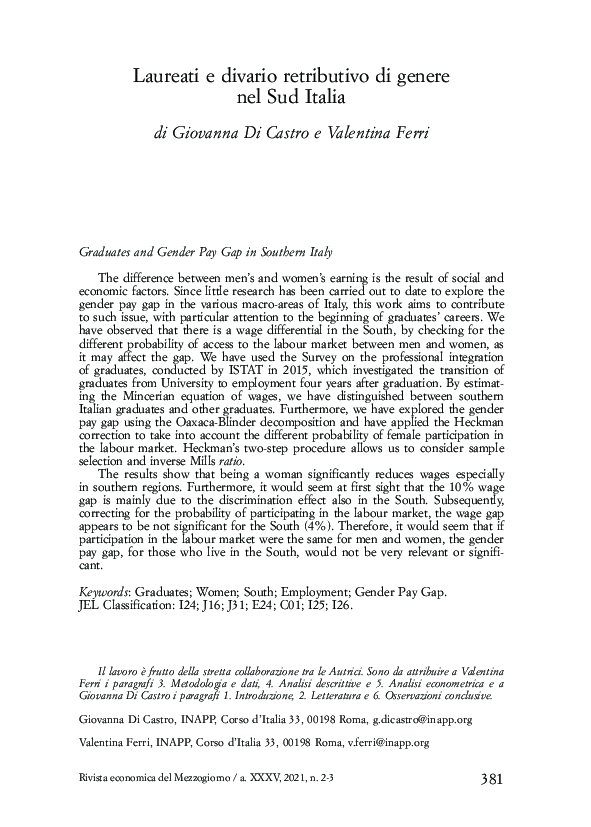