This paper deals with the world income distribution. In the first part of the article we present a simple theoretical model. We consider an economy that is made up of a representative household and where agents are involved in three types of activities: consumption goods production, human capital investment and physical capital accumulation. By embedding the Lucas (1988) model within the neoclassical growth theory, we determine endogenously the allocation of skills between human capital accumulation and consumption goods manufacturing. Population grows at a constant, positive and exogenous rate "n" and all the sectors are perfectly competitive. The economy under analysis features another peculiarity: the human to physical capital ratio is assumed to be constant in the very long run. This hypothesis is in line with empirical evidence and allows us to characterise a balanced growth path equilibrium where these two forms of capital may grow over time at the same, constant and positive rate. Our main result is that, along the balanced growth path, the equilibrium per-capita income level depends positively, among others, on the physical capital share of income and the level of skills each individual is endowed with. The second part of the paper is devoted to the empirical analysis. We use two data sets. The first one considers cross-section data relative to 162 countries in the year 1999. The second data set, instead, is a panel of 142 countries over the period 1960-1995. Overall, the data seem to confirm the main conclusions of the theoretical model. Indeed, we find that per-capita output depends positively on (different) measures of human capital and the physical capital share of income (as long as one approximates such a variable with the investment to output ratio). Finally, in the third part of the paper we use the estimated model to study in more detail the process of convergence (sigma-convergence) in per capita incomes across countries over the period 1960-1995. We conclude that: 1) the convergence in per-capita incomes does not seem to be a strong feature of the considered period; 2) in the same period the international differences in human capital accumulation decreased, whereas those in physical capital accumulation increased. As a consequence, our analysis suggests that the reduction of the international gaps in physical capital accumulation would be the key to the convergence in per-capita incomes across countries in the future. 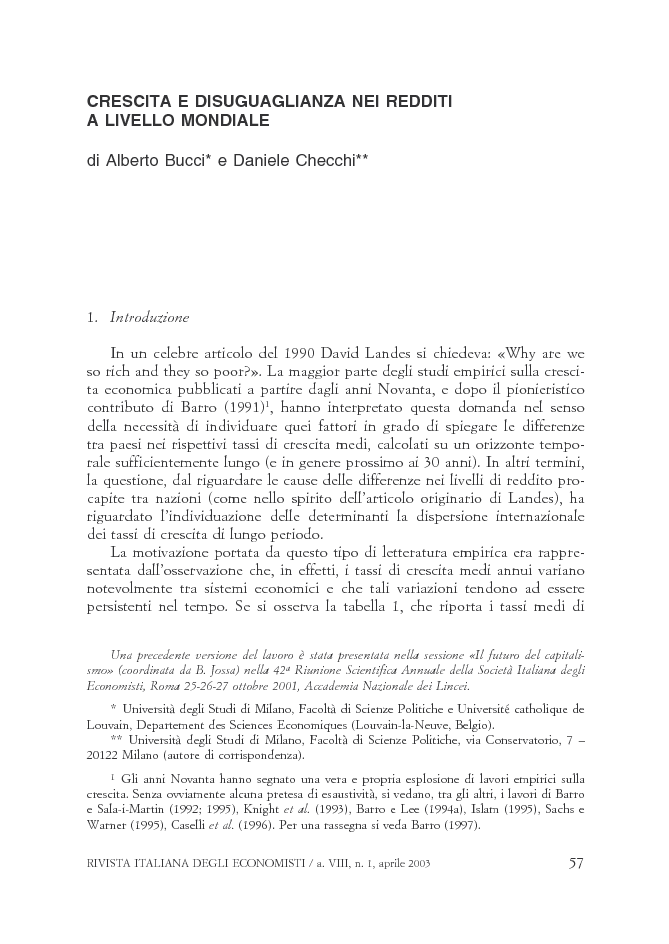