According to the "separation property" identified in the literature on franchise bidding, the auction appears to be a simple appendix to be «stuck» onto the overall regulation phase, in which the PA can only reduce the informational rent of the monopolist; so the tender process does not yield useful information to improve its choices in the subsequent phases. In this work we show that this result depends strictly on the hypothesis of coincidence of the regulator's beliefs with those of the competitive firms on the costs of a specific firm. In reality, however, it often happens that the functionaries of the regulatory authority are not endowed with a specific knowledge of the production technology of the service or good which the monopolist must supply. For example, in Italy many public services at a local level are regulated by bureaucrats who are completely lacking in any sort of experience at a «production» level. In other cases, however, it may occur that the functionaries - while being technically competent - are not constantly updated on the innovations that can be implemented in the sector. For these reasons we have tried to formulate the model in a different way by admitting the possibility that the regulator is dealing with a double asymmetry as compared to the firms. The idea is to hypothesise that the costs of each firm depend on a factor that is common to all producers, one that is known to the firms themselves but is unknown to the regulator, and on a private factor which is completely unknown to both the competing bidders and to the regulator. It is evident that the lack of knowledge of the common factor makes the regulator's information regarding the costs of the firms much vaguer than that of the firms. We show that, in this case, the separation property is no longer valid, and the optimal tariff is found to be a decreasing function of the degree of competitive pressure exercised during the auction. The results obtained are really relevant, in that they influence the type of interaction between competition and regulation in the case of the awarding of a franchise by means of an auction. In fact, within this new perspective, the auction becomes a useful instrument, not only for limiting the contractor's information rent, but also for reducing the ex post inefficiency on the rate, causing benefits in terms of allocative efficiency. 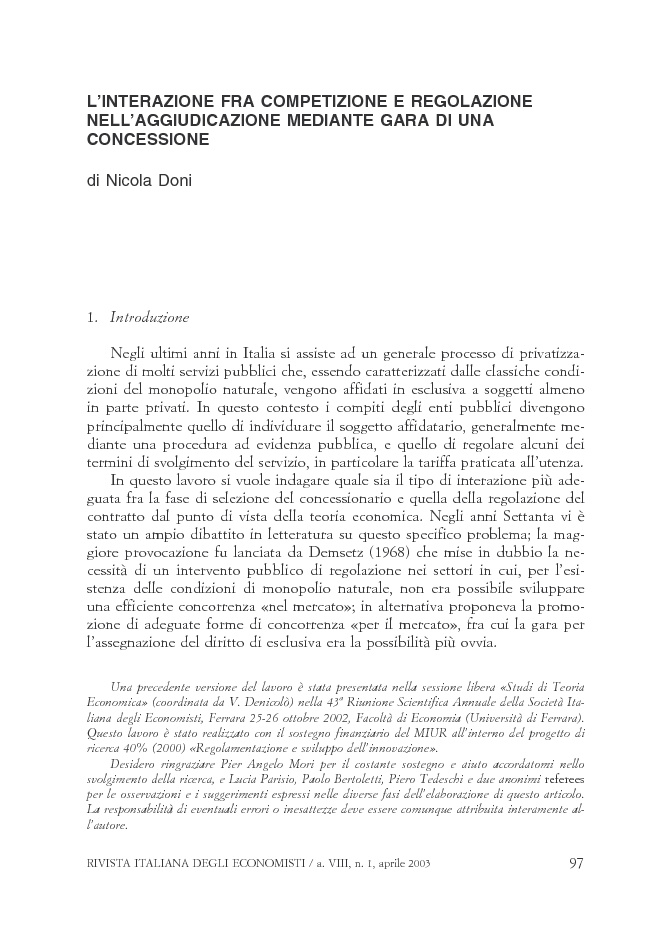