The fact that in the May 2001 elections Berlusconi's coalition has won a sizable majority in both Chambers does not prove that the Italian electoral system is working satisfactorily. Some governmental stability and a bipolar competition have been achieved, but this outcome may also be obtained, as in several European democratic regimes, by utilizing appropriate Pr electoral systems. Where the existing Mattarellum has utterly failed is in the reduction of the number of parties. Moreover, the bipolar structure of the electoral-political competition seems to be the product of the "depolarisation" of the party system more than of the mechanics of the electoral system as such. Indeed, the voters have decided to reward the two major coalitions and to deprive of support individual parties running alone. Within the two major coalitions, small parties retain a lot of power, have been politically rewarded and remain in a position to play a destabilizing role (as the League did in 1994 and Communist Refoundation in 1998). Better electoral systems than the Mattarellum can be devised. Some reforms were entertained, but failed. However, if and when they master the logic of the electoral systems, political scientists would be well advised to criticize those politicians who behave badly and to show that they do care about the functioning of the political system. 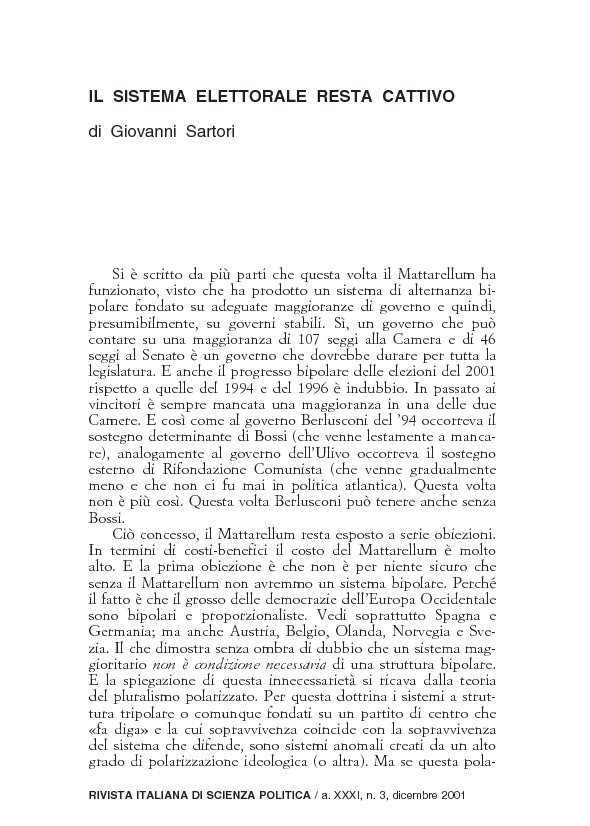