In the 1990s new electoral systems have emerged in many countries worldwide. The collapse of the communist regimes in 1989 and the transition towards democracy in some South American as well as Asian and even African countries have been often accompanied by the rebuilding of the institutional framework and, consequently, by the introduction of new voting systems. Moreover, electoral reforms have occurred not only in emergent but also in established liberal democracies. Facing an increasing dissatisfaction with the working of the political system, Italy, New Zealand and Japan all changed their national electoral systems radically. The common ground of most of these reforms has been the introduction of mixed electoral systems, i.e. systems combining majoritarian and proportional principles of representation. So, this paper tries first of all to define what "mixed" electoral systems are and to demonstrate the legitimacy of treating them as a distinct category, separated from both majoritarian and proportional systems. Secondly, it provides an overview of their basic characteristics - ballot structure, assembly size, district magnitude, electoral formula, legal threshold - and identifies four major types of mixed systems on the basis of their way of mixing majoritarian and proportional tiers. Thirdly, their effects on disproportionality and party system are investigated so as to highlight their practical working in each national context. Finally, this paper attempts to answer the question of whether mixed electoral systems are "the best of both worlds" (i.e. of the majoritarian and proportional worlds) as regards their ability to produce government stability and representativeness at the same time. 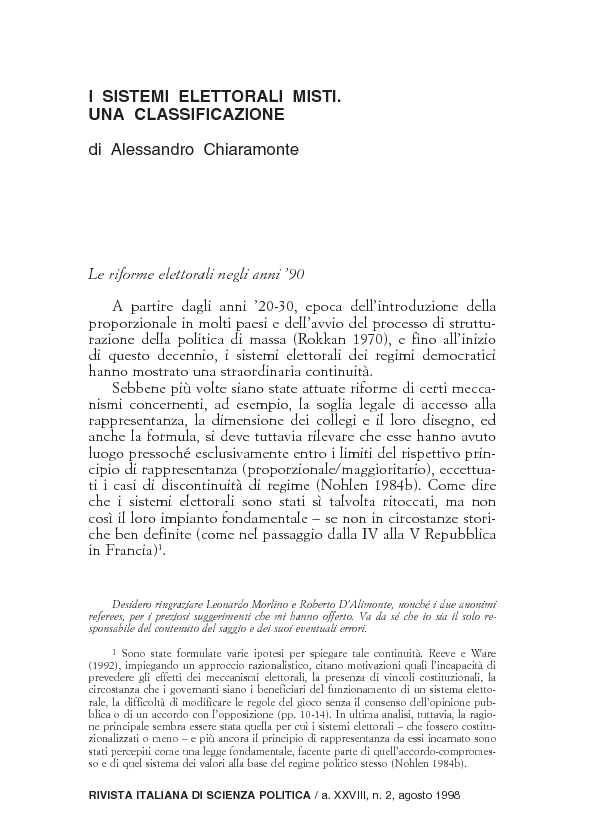