This article investigates how employment change has been intersecting and intertwining with the growth of immigrants among the labour forces in Italy under the hypothesis that migration inflows not only depend on but also affect the labour demand and employment changes in the receiving countries while also changing the composition of the labour supply. Employment changes and labour migrations are very often separately considered. The results from both of these broad literature streams provide several pieces of evidence to highlight how employment structures and migration flows influence each other, mediated by the institutional context. Indeed, employment structures and employment changes are affected by the characteristics of the economic fabric, labour market regulation and the welfare system, which also influence natives' and immigrants' opportunities and choices. This article adopts a macro-structural approach and focuses on the Italian case in comparison with seven European countries representing the European institutional variety: Denmark, Sweden, the Netherlands, the United Kingdom, Germany, France and Spain. The aim is to show how in Italy, the downgrading pattern builds both on the stagnation of skilled job creation by the productive fabric and the enormous demand for care services from families, intertwined with immigrant labour. The analyses build on European Labour Force Survey microdata that have provided information about respondents' country of birth since 2005, thus allowing for immigrants to be distinguished from natives. 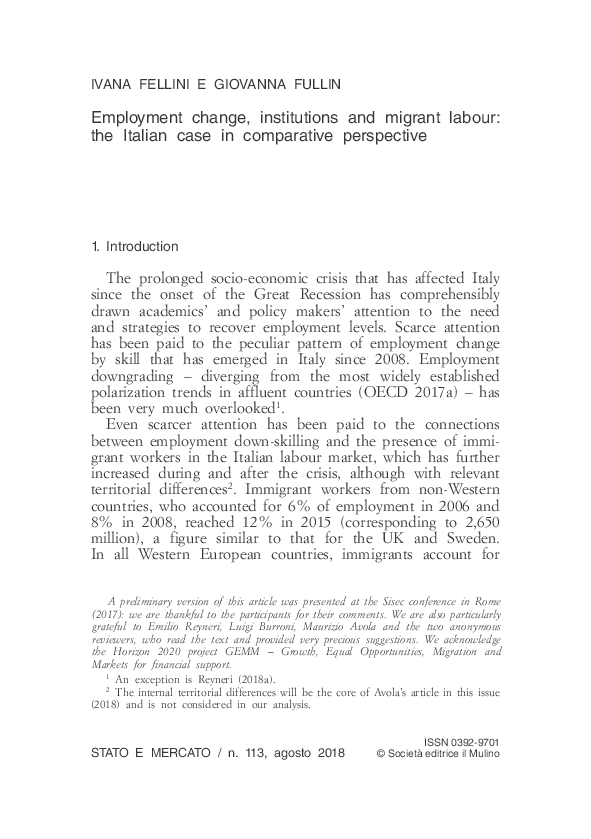