Three main theoretical perspectives have been used to frame the allocation of domestic chores within households, namely the time availability, the relative resources and the doing gender perspective. Using time budget data from Indagine sulle famiglie Italiane: Uso del tempo (2002-2003), we test for the three theories keeping into account both individual and household characteristics. In particular, we test for the effect of belonging to dual or single earner households and for the effect of educational homogamy of the spouses on the amount and share of domestic chores undergone by the couple. Further, we introduce the context as important factor influencing the division of chores and run multilevel models to control for regional variation. We find that Italians follow a traditional division of labor inside the household, with men still wearing the breadwinner's shoes and women mainly responsible for domestic chores and care activities. However, important differences emerge when considering different types of households and different geographical settings. In particular, dual earner couples display a smaller disparity in the division of domestic chores, as relative resources and time availability perspective would predict. Furthermore, highly educated homogamous couples are found to do less domestic work and to share it more equally. However, this effect is strongly influenced by geographical zone: women in the southern regions of the country do not modify their share of chores according to their educational status as women in the north, therefore bringing support to the doing gender perspective in this part of the country. 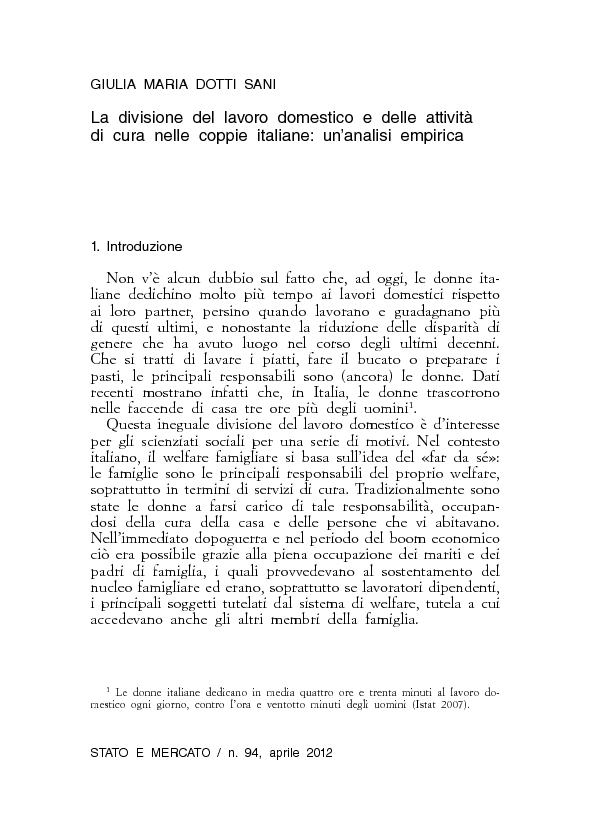