In the Italian debate on welfare policies, the issue of elderly non selfsufficient people does not yet receive the due attention, though its importance will grow abruptly in a few years. The extraordinary acceleration of the compression of mortality does not seem just now adequately counterbalanced by an equal compression of morbidity. On the basis of the evidence of some recent Italian surveys, the a. explores the dynamics of economic covering of the elderly disability in the current Italian welfare system, particularly focussing on the caring allowance for disabilities named "assegno di accompagnamento", and remarks a clear-cut mismatch between demand of economic support and welfare supply, which is markedly age-dependent. The covering is redundant and partially improper among the 'young' elderly, whereas it is hard lacking among the over-85, just in that life span destined to increase most rapidly. It is true that the improper covering can be reabsorbed by inserting the clinical frame of illnesses of the elderly among the evaluation criteria to assign an welfare allowance. However, the enlargement of the evaluation criteria produces in turn a growing demand of cash support by the oldest old people, who are both fast growing and most exposed to a risk of disability. 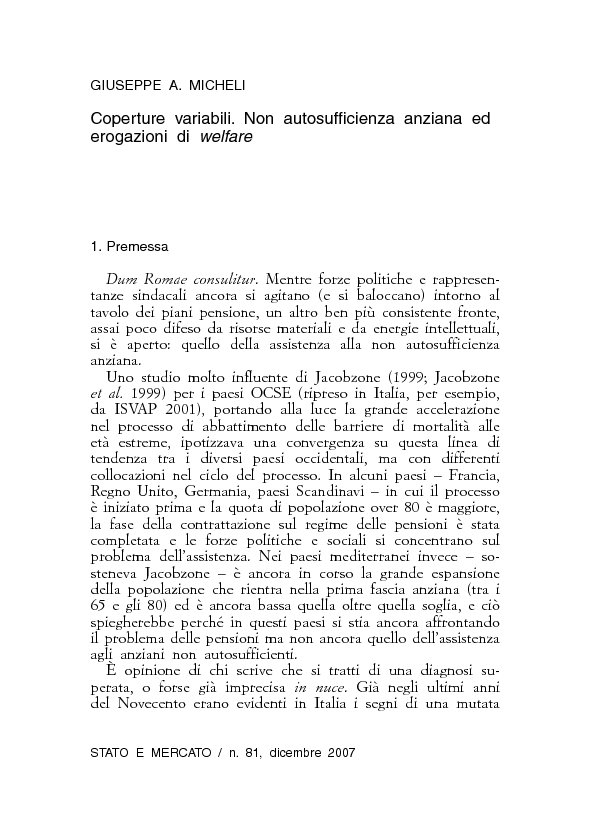