During the Clinton and Bush administrations the US economy has performed better than the other major OECD countries, widening again the GDP gap that had narrowed during previous decades. However, this outcome has been achieved at the price of large imbalances: the federal government position has moved from a 2% surplus to a 4% deficit, the current account deficit is now close to 5% of GDP, net savings are at an historic low, a huge financial bubble developed in the second half of the 90s and, in order to counter the deflationary risks of its burst, the Federal Reserve had to cut interest rates from 6.5% to 1%, bringing short term interest rates into negative territory. This article analyzes fiscal and monetary policies during the two presidencies and their role in enhancing economic growth and stabilizing the economy, as well as in affecting the imbalances mentioned above. In particular, the article focuses on two key issues: whether the Federal Reserve should have intervened to deflate the financial bubble and whether the benefits of the fiscal policy of the Bush Administration outweigh its costs. The article concludes that, although, as a whole, monetary and fiscal policies during the two last presidencies have provided a positive contribution to economic stability and growth, in some cases they have not been able to eliminate or dampen the destabilizing dynamics that were developing within the economy and/or have increased its imbalances. 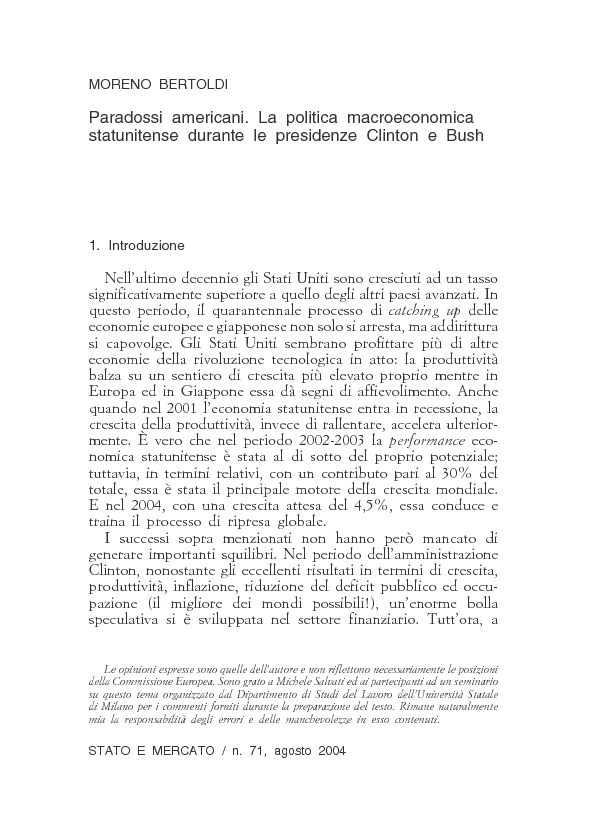