In the recent period several studies have pointed to the growing economic differentiation in southern Italy. They call particular attention to several areas of local dynamism which are emerging. However, the role of social and political factors is not clear. Some authors try to revise the classical concept of clientelism, in order to propose different clientelistic "styles" and to identify among these, which are cases of supported economic development. Nevertheless, this perspective doesn't clarify how these particularistic mechanisms work. This article tries to expound the relation between political variables and economic development through a comparative study of four local systems in southern Italy (Avellino, Salerno, Termoli and San Severo). Even though the author herself argues that the role of local politics is crucial to explain the South's internal economic differentiation, she adopts a different point of view from that mentioned above. According to the concept of "selective modernisation" advanced by Richard Bendix, local politics may have a positive role if it is "modern" politics, that is it provides local collective goods and it's relatively universalistic. The main hypothesis of the research is that two factors of dynamic local systems may have affected a process of modernisation: social and political cohesion. The article tries to deepen these conceptual categories and their implications for local economic development. 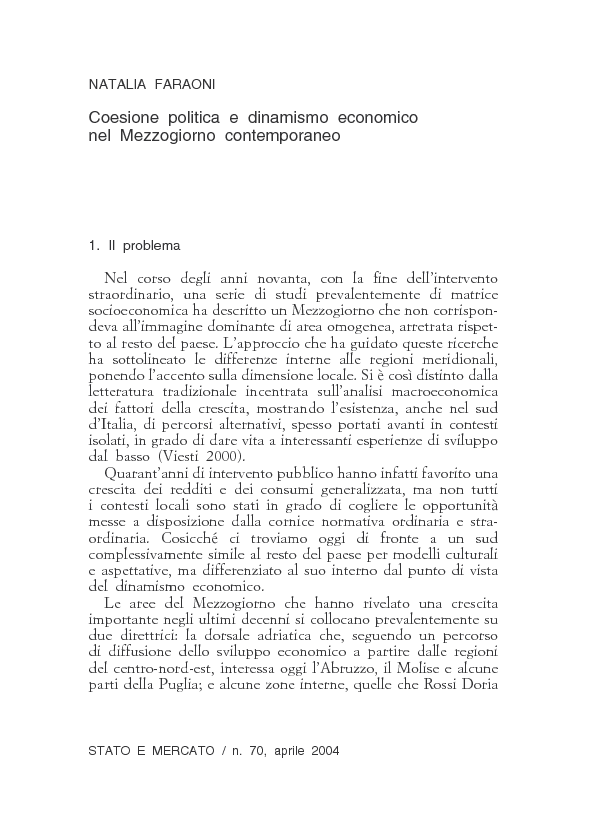