In the last decade, the field of sex work and anti-trafficking in Europe has been the object of renewed attention, often presented as being about «gender equality». While feminists have been at the forefront of these debates, they appear to be increasingly divided around the «prosex work» and the «sex work as a form of violence» approaches. This article argues that by conceiving these two positions as irreconcilable, and by promoting standardised international policy solutions that fail to take into account local contexts, these current feminist engagements jeopardise alternative feminist traditions in which diverse stances on sex work coexisted, and which can be usefully studied in order to overcome some of the current impasses. Taking Italy as its case study, this article shows how between the 1980s and the 1990s feminists were able to develop a «feminist alliance» capable of supporting the emancipation of women selling sex and of migrant victims of trafficking. Drawing upon the analysis of texts, we explore the strengths and weaknesses of such an alliance, and the reasons why in a context of austerity, antimigrant sentiments, and new security approaches, it is currently at risk of disappearing, leaving the space for the new feminist polarisations. 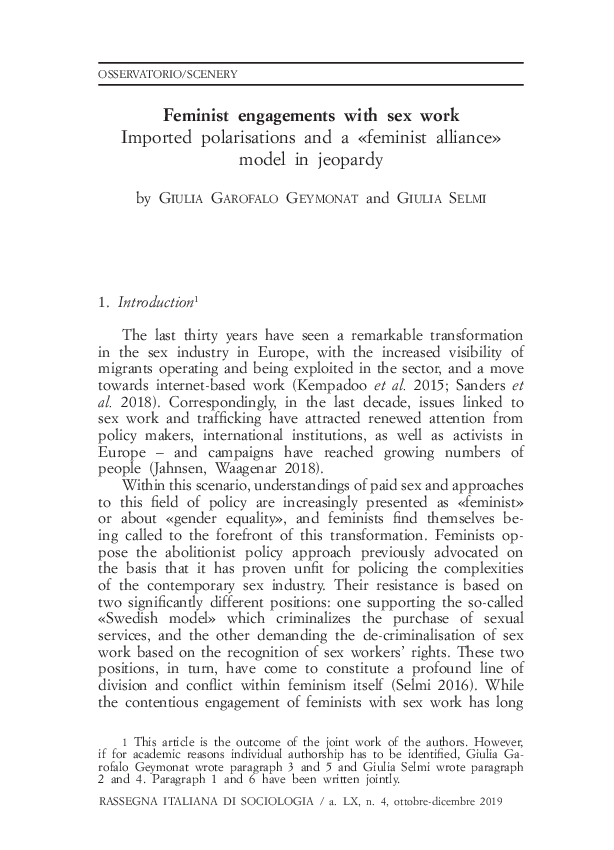