In recent years, we have witnessed an online backlash against feminism (Menzies 2008). This backlash is mobilizing a loose confederacy of interconnected communities from more traditional men’s rights activists (MRAs) to the new misogynistic techno-cultures of the Manosphere (Nagle 2015). Despite their differences, in all of these groups, feminism is reconfigured as intrinsically prejudicial and threatening towards men (Blais, Dupuis-Déri 2012) and labelled as nothing more than misandry (Marwick, Caplan 2018). The use of misandry as synonym for «man-hating» serves both misogynist subcultures and more moderate men’s rights interests, in that it allows these groups to appropriate the language of identity politics in order to place men as the silenced victims of a reverse discrimination in every political, economic, and social arena (Savran 1992; Farrell 1993) and reinforce their sense of aggrieved entitlement (Kimmel 2015). Situating their belief system in a social vacuum that fails to consider intersecting social dynamics, MRAs construct an over-simplified cultural model of the social world that isolates practices and phenomena that they believe are uniquely harmful to men (Schmitz, Kazyak 2016). In this way, their anti-feminist rhetoric takes the form of a neoliberal and seemingly neutral strategy that avoids any analysis of structural inequalities in favour of a commonsense celebration of individual choice for women and men (Nicholas, Agius 2018). This «pro-male» anti-feminism (Ging 2017) is indicative of a wider complex backlash (McRobbie 2004) that both accepts some of the precepts of feminism such as the principle of liberal equality, alongside a strong rejection of feminism as a label and political project. Given the theoretical framework outlined above, the general aim of this study is to explore the Italian MRA and Manosphere online network to take stock of the current situation and the risk it represents for feminism. More precisely, the study aims to unveil some of the key drivers of anti-feminist ideologies and will be guided by the following questions: which representations of feminism and feminists emerge in Italian online communities and how they spark criticism of feminism? Is neoliberal feminism a specific target of this criticism? Are MRA and manosphere communities both represented online and, if so, how are they bound together? How does the Italian situation differ from the international one? 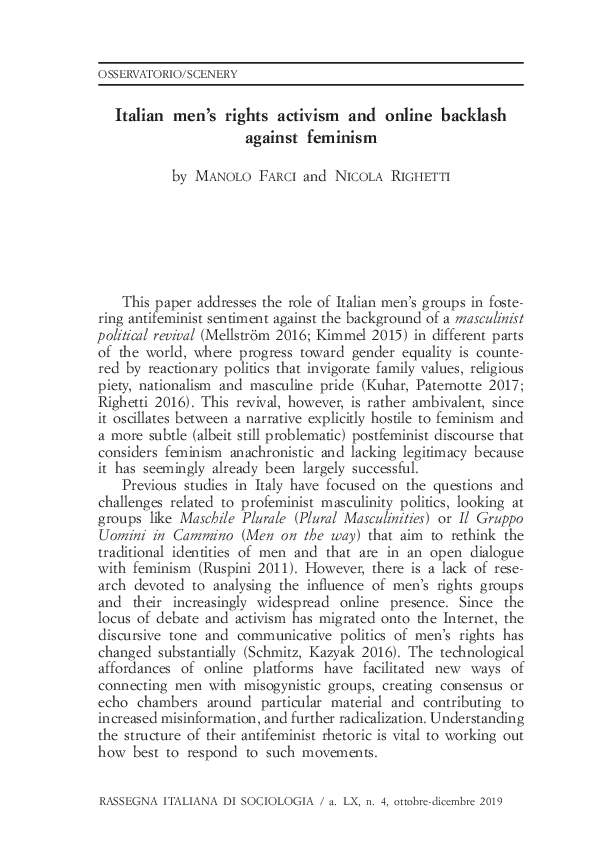