Almost all the workstations today still have front-ends inspired by the desktop metaphor created by Alan Kay and co-workers at Xerox PARC in the seventies and giving form to the first Macintosh in the mid-1980s. But time has passed and workstations have changed: their functions and features are continuously growing; their internal memories are reaching a capacity of some terabytes; email connects them to other workstations with links through which messages and documents are exchanged with high frequency; the web opens to them an incredible exponentially growing amount of information and services. It is not surprising, therefore, that workstations exhibit more and more limits to their users: we can say that they have reached a situation where any new function or feature installed in them as well as any new information or service made accessible through internet affects the advantages they offer with the growing complexity of the workstation management they induce. We want to underline that also the attempts to contain the growing complexity of workstations with tools like search engines, filtering mechanisms or integration tools are ineffective, since, at last they end up increasing the work users have to do for managing their workstation. A way for overcoming this impasse is to take the lesson coming from the research performed at both sides of the Atlantic along the perspective of situated action and/or cognition: human actions and interactions are situated in space, time and, first and foremost, in the social experiences participants live together. The social experience of human beings can be seen as a set of intertwining stories, filtering the immense richness of what is available to them and transforming information into knowledge. We have based on a metaphor reflecting the situated action perspective, called «stories and venues», an operating system for workstation, itsme, creating for any story lived by a user a venue where she can find all what is relevant in that story. Without entering in details of our operating system (the full paper will provide more information on these issues) we recall here that itsme leaves to its users the maximal freedom in the creation of stories and updates automatically their venues. Itsme appears to be a rather radical innovation in a field that can be considered from many viewpoints mature and steady: its success depends therefore from our capability to couple innovation and continuity so that it convinces potential users that the effort to adopt it makes sense and has a value. A discussion of this point will conclude the paper. 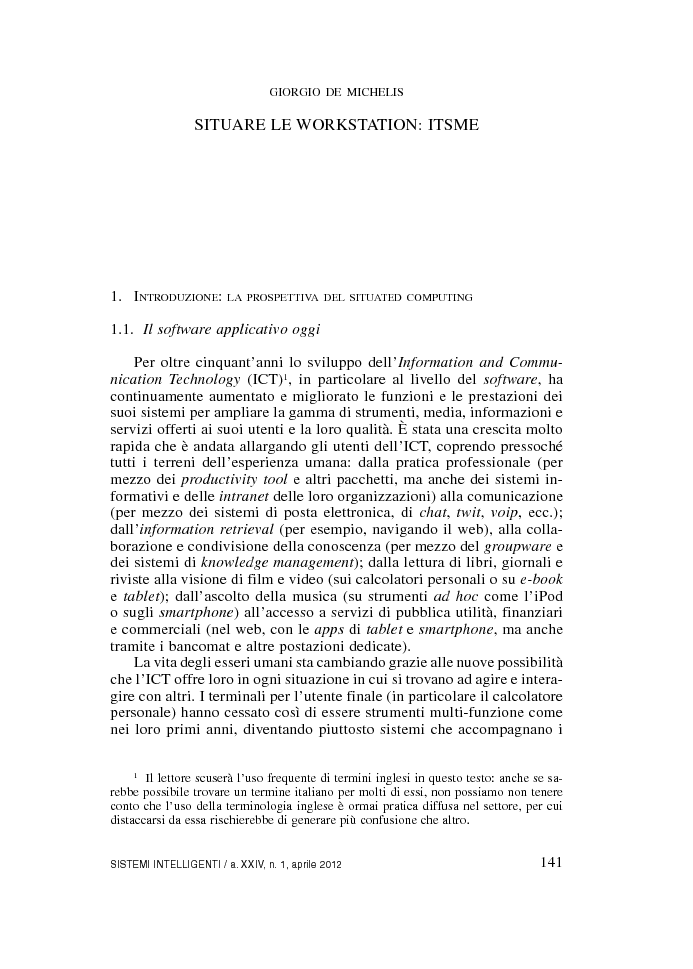