This paper investigates scalar implicatures (SIs) computation in dyslexia focusing on the role of the quantifier’s semantic properties. We developed two protocols, a Statement Evaluation Task (SET) and a Truth Value Judgement Task, using two Italian quantifiers, alcuni (a cardinality quantifier) and qualche (a proportional quantifier), both corresponding to the English ‘some’. The tasks were administered on 18 dyslexic children (10.6 y.o.), 18 age-matched controls (10.7 y.o.) and 18 adults (24.5 y.o.). Unlike the other groups, dyslexics showed a higher tendency to avoid the derivation of a SI. We propose that this is due to the processing limitations characterizing dyslexia and to the high cognitive costs imposed by SIs com- putation, especially in the SET, which, requiring access to encyclopaedic knowledge, is more cognitively demanding. Furthermore, in this task all groups showed longer latencies when the SI was licensed by alcuni: we propose that this is related to the semantic properties of this quantifier, whose interpretation requires the introduction of a new discourse referent corresponding to the intersection between two sets and associated with a specific cardinality property (at least two). This step increases the processing costs of implicature computation, exerting an effect that becomes tangible when the processing demands of the task are higher. 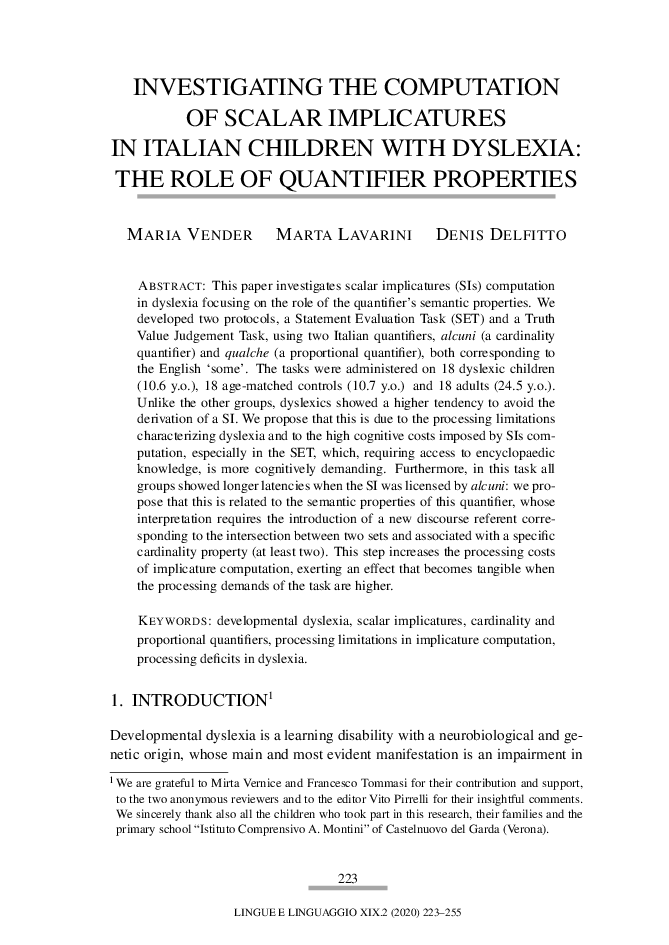