The essay focuses on key current questions through a comparative analysis of the treatment of displays of religious symbols in public places. These questions include: whether, assuming commitment to pluralism, multiculturalism and religious and non-religious comprehensive views, there may be ways to improve on existing models or to replace them with better-suited ones given the new religious and political realities; and whether tolerance can be redeployed to boost pluralism while avoiding irreconcilable conflicts between religious fundamentalism and secularism. The place of religious symbols in public spaces provides a particularly good case study in as much as conflicts over such symbols constitute a direct challenge to the legitimacy of the dominant conception of constitutionalism as inextricably linked to secularism. In a pluralistic society, religious symbols play a key role in identity-related dynamics. Moreover, globalization, large-scale migration and the aftermath of September 11, 2001 have dramatically increased the quest for social cohesion and strong collective identities. Religious symbols figure prominently in this quest because they evoke absolute, and therefore reassuring, truths, although they can easily turn into catalyzers of aggression, to the extent that they generate blind fixations and unquestioned adherences. Majorities and minorities seek shelter in religious symbols, as a reflex against the increasing difficulty they experience in finding a common core of shared civic values. A comparative analysis of the reactions of courts and legislators confronted with such conflicts reveals a tendency to counter or minimize pluralism, rather than to seek a reasonable accommodation of the different religions within the polity. 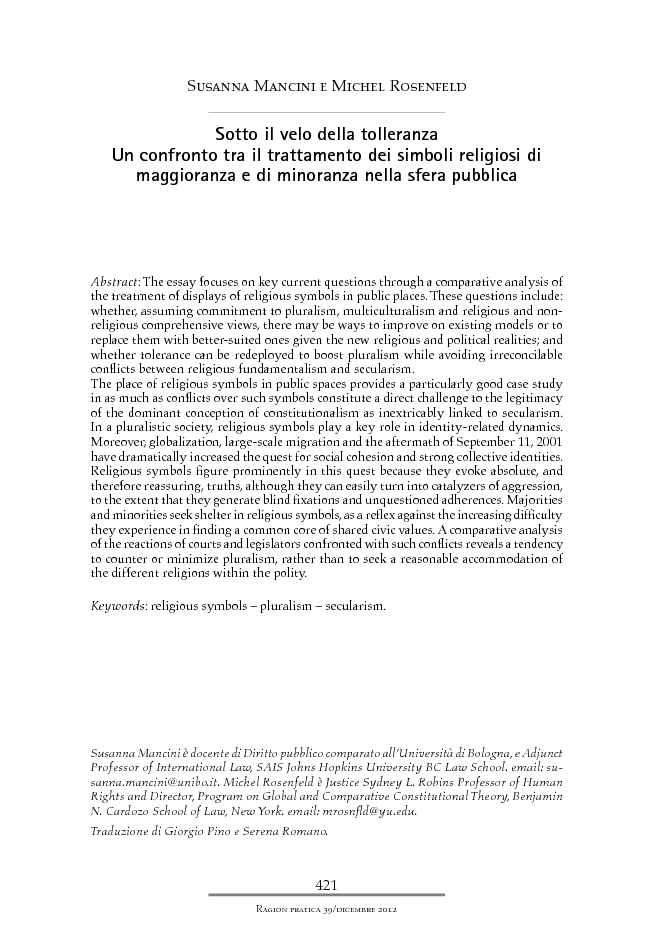