The growing influence of idealistic philosophy at the University of Rome was paralleled in the early Thirties by the rise of Fascism. Giovanni Gentile, severing his way from that of Benedetto Croce, joined the regime, while some of his pupils developed a straightforward theory of totalitarian economics and society. The inner crisis of the philosophy of "attualismo" was in a sense mature when, at the end of World War II, Gentile was killed by a partisan commando. Touching briefly on the controversial figure of this thinker and reformer of education, director of the "Enciclopedia italiana", ideologist of the ethical state - as discussed at large by recent historians - this paper deals with the aftermath of idealism. Carlo Antoni's revival of the "absolute historicism" of Croce was met by two divergent lines of a critical assessement of the inheritance of "attualismo". Ugo Spirito, former theorist of corporative economy, in his unrelaxing struggle for new formulas of doubt and skepsis, finally teorized a kind of irenic society, and hypostatized "science" as the final goal of philosophical inquiry. The eminent historian of ancient logic, Guido Calogero, first actively engaged in anti-Fascist conspirancy, developed his "philosophy of dialogue" as a moral answer to idealistic solipsism and panlogism. The controversy about the inheritance of Italian neo-idealism, still open in many ways for more than a decade, was eventually superseded by new trends of thought. In the late Sixties and in the Seventies historiography, analytic philosophy, linguistics, the controversy about marxism, the philosophy and history of science shifted increasingly toward a pluralistic approach to philosophic inquiry, eventually involving the dissolution of the so-called "scuola romana", and a growing tendency to specialized studies. 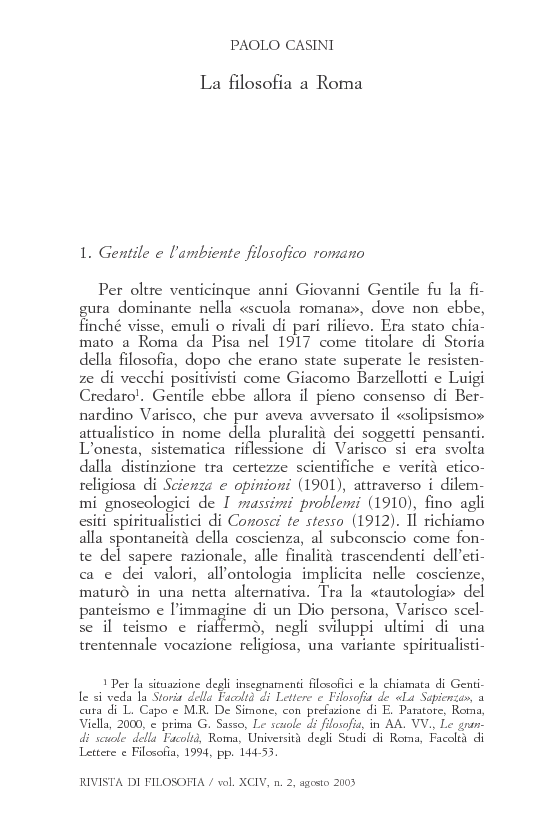