The making of the "Enciclopedia italiana" in the years 1925-1937 was patronized by Mussolini, who gave his support to the enterprise and exalted it as one of the most successful 'national' achieve¬ments of the fascist regime. However, the director of the Enciclopedia, Giovanni Gentile, himself a theorist of the totalitarian state, affirmed that neither the fascist ideology, nor his own thought, had a really dominant influence on the whole work. His guarantee, and his behaviour as a relatively liberal and tolerant opinion leader, ob¬tained a remarkably wide audience - even in non-fascist milieu - in minimizing the ideological bias of fascism, and of "attualismo" as well, in the main articles of the "Enciclopedia". The present paper, leaning on some recent studies about the history of the "Enciclopedia", challenges this commoplace by focusing on the supple tech¬niques of persuasion and propaganda which were used by Gentile himself in his approach to the fascist ideology in the anonymous prologue to "Fascismo" (under Mussolini's signature) and by a small group of scholars in some related articles. Moreover, a number of articles in the philosophical section of the "Enciclopedia", put under Gentile's personal control, presented his own philosophy of mind as the main achievement of modern idealist speculation. Paradoxically enough, there is evidence in some other articles of the symptoms of a reaction against his views concerning politics and the relationship between philosophy and science. But the relative obsolescence and failure of "attualismo" as an ideology is underlined by considering some boderline articles concerning the philosophy of science, and more generally the actual scientific content of the mathematical, physical, astronomical, biological sections of the "Enciclopedia", which were written by scholars like Enrico Castelnuovo, Enrico Fermi, Edoardo Amaldi, and other contemporary Italian scientists. 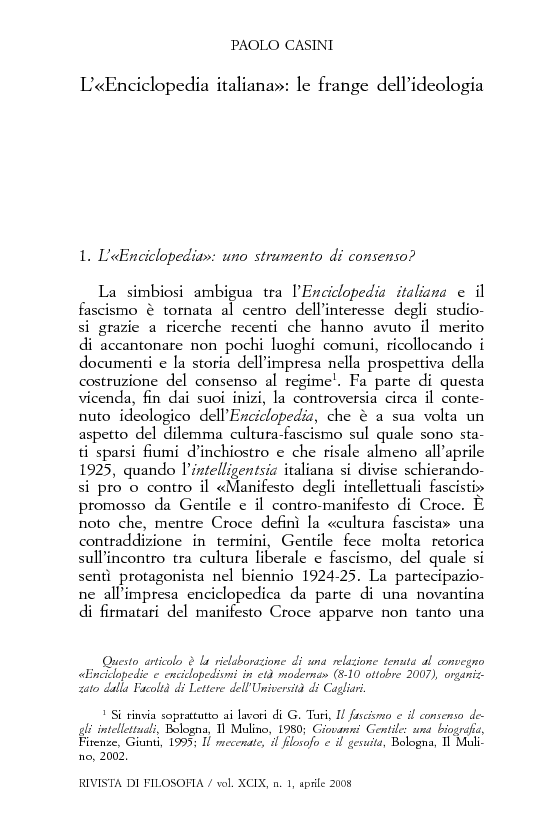