The balanced accounts are first recorded as such in the work of Luca Pacioli (XV-XVI sec.) "Summa de arithmetica, geometria, proportioni et proportionalita", San Sepolcro 1494, where in the "Tractatus XI - Particularis de computis et scripturis" the grey friar described the way the Venetian merchants used to account their activity and balance (it is the reason why this balancing system is known as the "Venetian method"). Now, in the cuneiform texts from Mesopotamia we have a peculiar way of balancing which was labelled in the documents as "ni3-kas7-aka", translated by the modern scholars simply as "balanced account", where a similar way of bookkeeping was used. These texts are divided in two parts, the former recording the initial amount of the settled good and its provenance (the "capital", in Sumerian: sag -ni3-GA-ra), while the latter records the expenditure of the same good (described by the Sumerian term zi-ga, "expenditure", or similar); at the end there is the "balance", that is either a deficit (in Sumerian: diri) or a surplus (in Sumerian: la2-i3). Every good could be balanced, silver, barley, cattle, etc., but the best known among this typology of texts are the documents which record the financial activity of travelling merchants (Sumerian: dam-gar3) from the city of Umma (one of the richest provinces of the Ur III Empire), the so called "merchants' accounts"; in these cuneiform tablets these merchants balanced the use of silver which was given them by the State in order to acquire goods which were not to be found in Mesopotamia (precious and semi-precious stones, woods, spices, peculiar objects) from distant regions (India, Oman, Iran, etc.). The aim of this article is to present a peculiar kind of the documents labelled "balanced accounts" which were drawn up in the last century of the IIIrd millennium B.C. in South Mesopotamia during the so called "Ur III Dynasty" (2112-2004 B.C.); in fact only two documents of this kind are known up to now and they contain the balanced account of silver of a district of the province of Umma for the period of one administrative year, respectively the last year of the king _u-Sîn and the first of his son and successor Ibbi-Sîn. Here it is possible to highlight the fact that silver had a wide range of different economic applications (means of payment, standard of value, store of value) which can be absolutely compared with the uses of money (the first attestation of which is in the VII century B.C.) in the modern times. At the end of the article some considerations about the presence of the "private" sector in the IIIrd millennium economy are developed, a theoretical question which is of fundamental importance for the reconstruction of the financial history of the period. 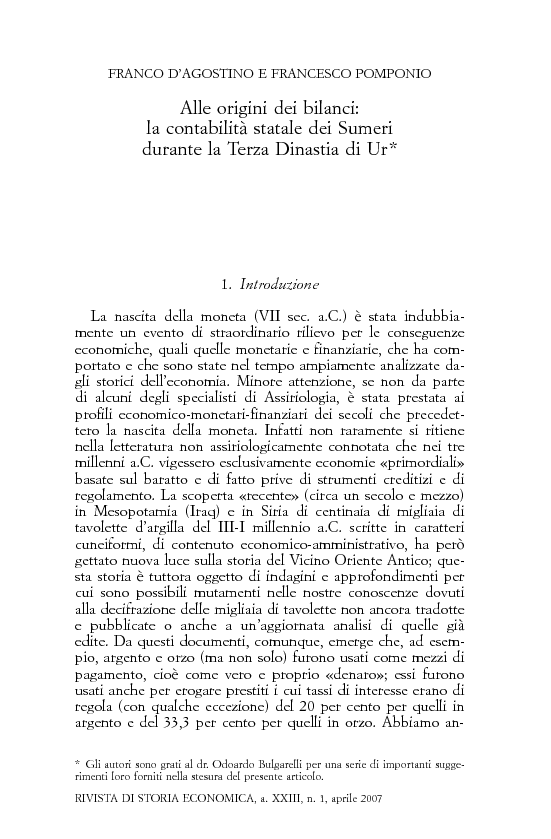