The article takes its cue from Antoine Lilti’s book, L’héritage des Lumières (2018) and retraces the themes dealt with by the author with the intention of describing the central problem areas in the culture of the Enlightenment. The author’s reflection focuses on the issues of Western economic and colonial expansion and the conflictual nature of the commercial civilization of the West, highlighting how European Enlightenment – the analysis focuses on French culture and, subordinately, Scottish culture – has shown a lively awareness of the problems of contemporary globalization and the demands it has subjected ethics, the vision of history, the conception of society and political power, religious ideas. These phenomena have influenced the development of a cosmopolitan attitude, paradoxically divided between acceptance of diversities and eurocentrism that is, in its contradictory aspects of recognition of the variety of human cultures and of universalistic tension, aimed at affirming the superiority of the values of the white, expanding West and the historical, almost messianic necessity of their global spreading. The article then dwells on the problems of modernity and politics, the other two central aspects of Enlightenment reflection as it is retraced by the author of the book: modernity as the development of a public media communication dimension and as a profound change in the space of private subjectivity; and politics as a space for the affirmation of rights and freedom in which the role played by the intellectual has been experienced by the Enlightenment in a conflictual and contradictory way, between challenge of and cooperation with powerful absolute sovereigns. The final part of the article dwells precisely on how the return to the Enlightenment has represented in various historical periods, as an inspiration for the critical use of reason, doubt and subjective engagement, a necessary moment for the redefinition of the tasks of intellectuals in the face of the conflicts of contemporary societies. 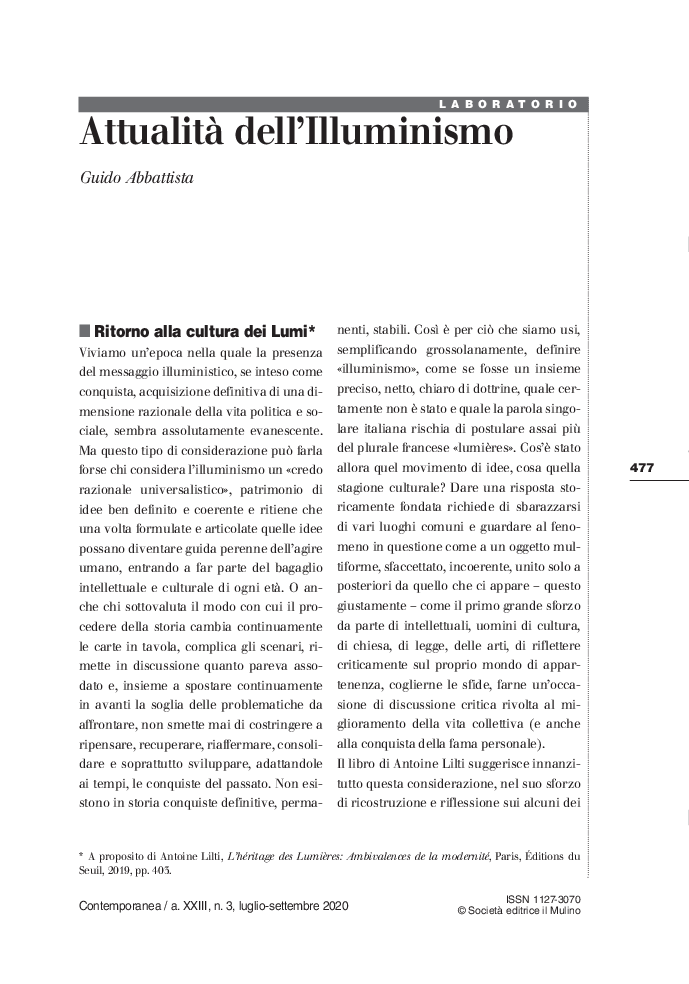