This paper focuses on the exchange of information between parents of illegitimate children born in the Roman countryside and the foundling hospital of Santo Spirito during the second half of the 18th century. This is a study of the "Filze dei bollettini e fedi dei proietti" records, where we can read the presentation letters written by parish priests to introduce the families of abandoned children to this charitable institution. In the letters, the priests attest to real situations of poverty and need for help, resorting to gossip as one of the means to gather information about the families. In fact, the priests were required to provide as much information as possible about the parents of illegitimate children, who were often unknown. Therefore, the first point I want to highlight is the importance of gossip as one of the main sources of information, and the ability of priests to draw upon this source. At the same time, gossip was a dangerous way to spread news which should be kept secret. In many cases, a parish priest would send a child to Santo Spirito to avoid public scandal, trying to hide a newborn by hiding him from the rest of the community, even baptizing him at home rather than in the public space of the church. Besides resulting in bad reputation for the mother, the birth of an illegitimate child was a disruption of the social order: thence the importance of the foundling hospital as the institution which could restore this order. If gossip could make a private matter known to everyone, taking a child away from the eyes and the rumours of the community would mend the wound suffered by the social body and help readmit the "guilty" mother (or couple) into it. If the "fault" had become public, so had to be the readmission: after the birth of the child, weddings, penitence and other practices were means for the "guilty" to regain their honour. The last point of this paper is the relationship between gossip and social networks. In his search for information about the parents of illegitimate children, the parish priest would move beyond the boundaries of the community, village, or town. In fact, the circulation of rumours and gossip was not restricted to the space of a single community, but crossed confines and spread over areas quite far from each other. 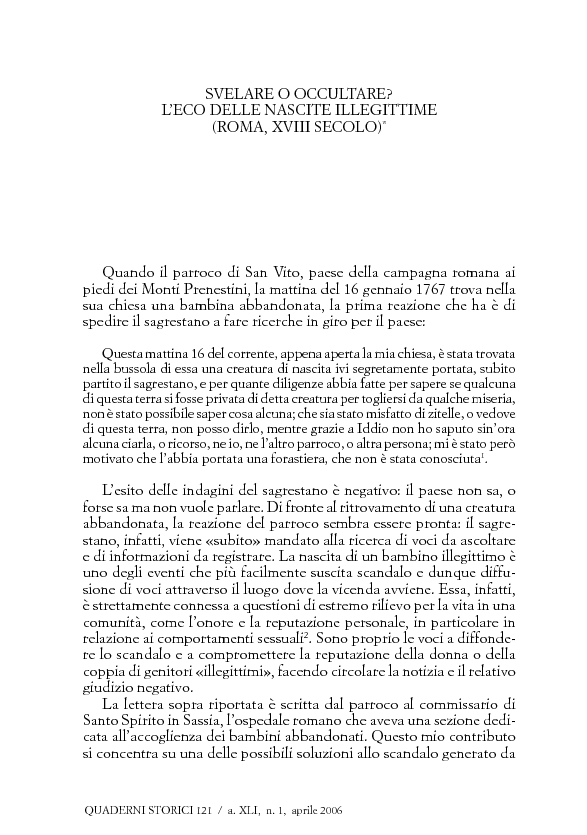