In the first part of the interview Amitav Ghosh exposes the historical framework in which his latest novel, "Sea of Poppies", published in 2008, is set. The Opium Wars that saw the East India Company and China fighting for acquiring the monopoly of the Opium Trade at the beginning of Nineteenth Century, constitute the backdrop against which the author constructs several characters coming from different social classes, but all involved in the research of the better conditions of life that the ship Ibis, leaving for Mauritius, could provide. Talking about colonization, imperialism, prisons and torture, Ghosh finds some similarities between his narration of the past and what is happening nowadays, referring to new dynamics of imperialism, to the Iraq War, Abu Ghraib and Guantanamo. Going back to the previous novels, from "The Circle of Reason" to "The Hungry Tide", Ghosh traces some recurrent issues that he has always liked to explore, such as the East-West encounter, the effects of colonial and postcolonial politics on Indian people, on private stories involved in History, the question of violence and terror within Indian society and, in more recent years, the environmental issue. In the interview, particular attention is given to the variety of languages Ghosh uses in "Sea of Poppies", those interstitial languages like lascari, pidgin, and many other "englishes" that emerged from the encounter of different peoples and cultures, but were suppressed in the course of history, in the name of language purity and assimilation policies. 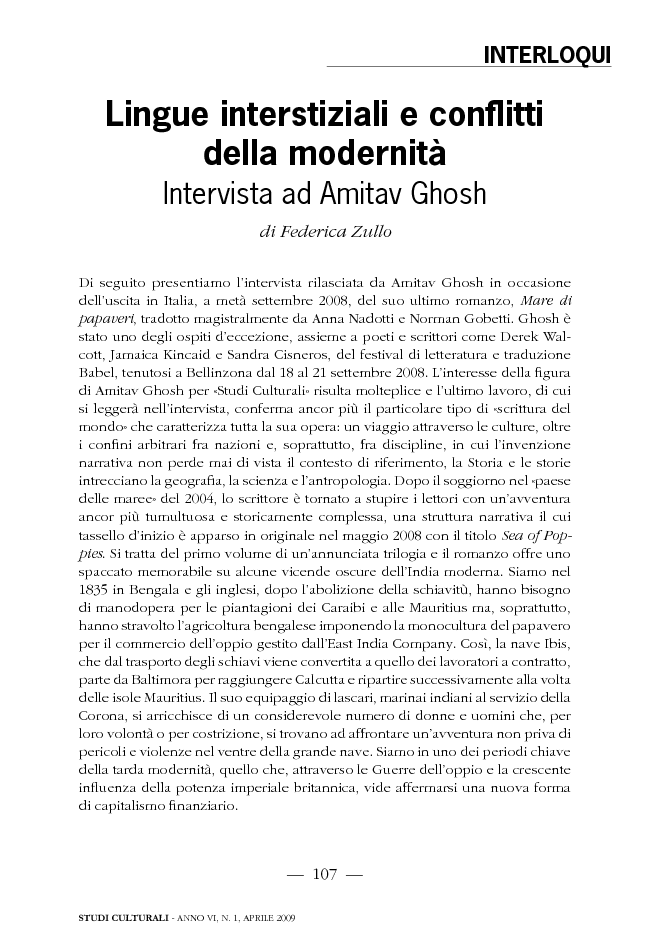