This paper aims to consider the nature of the first Principle - One Good and first God contemporaneously - in Plotinus' Neoplatonic perspective. It is regarded as "archè (ton) panton", which means the Principle of all things. It is therefore not any one of all things, as it comes before everything: indeed, it is "haploustaton", meaning «absolutely simple». This is the reason why "archè" cannot be positively described by way of cataphatic language, but only, so to speak, "via remotionis", which means in an apophatic way: we cannot say what the first Principle is, but we can say what it is not. Although removed from every kind of determination, the Principle, as the very basis of the identity between Being and Intellect in the intelligible world, has a feature which is inherent in its own nature: the first Principle is the source and origin the identity between being and thought in the intelligible reality whilst also being "absolute Identity", meaning identity beyond every kind of relation and determination. The ascent itself to the One Good, which transcends both knowledge and thought, occurs via a sort of "identification" and "fusion" with it. The longing to reach the "absolute Identity" of the Principle arises from a need coming from the thought itself, in its own search for an authentic and ultimate foundation of all reality. Starting with Plotinus, in Western philosophical tradition the "absolute Identity" is regarded as being closely related with the nature of the "Absolute", principle of all things, beyond every ontological determination and delimitation. 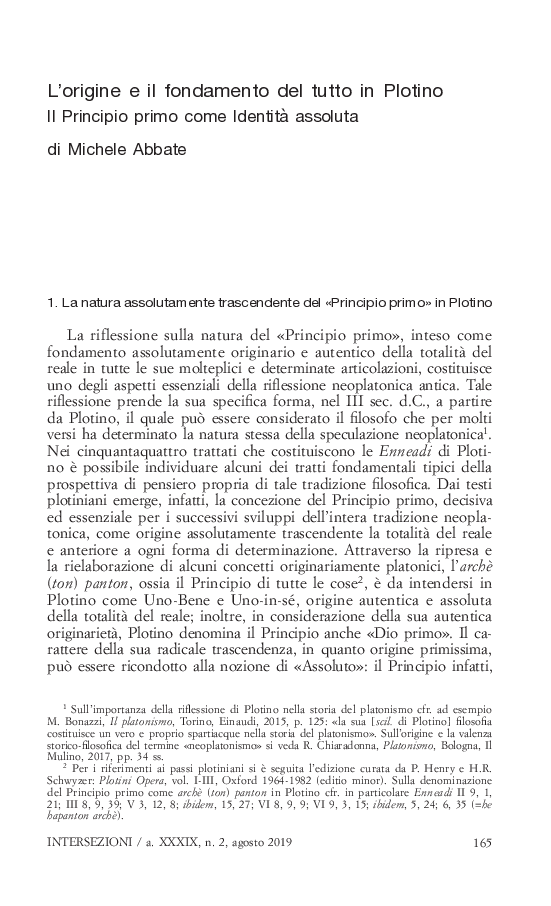