The emergence of the articulated voice in anthropogenesis is a relatively late event. Moreover, it is not necessary. It is a feature that makes it comparable to an artwork. This particular material and cultural device which is the human voice is produced by a silent and patient work of the body. This is because it is above all “skillfulµ, that is capable of manifesting its intelligence through matter. Indeed, this process leads us to homo sapiens starting from homo habilis and homo erectus. The voice is established where the hand already exists. The word is installed in the space traced by the gesture. We intend here to demonstrate that a significant portion of that silent work of the body we have referred to is accomplished by hearing, the most invisible of our abilities. This view necessarily puts at the center of our discussion both phylogenesis and the ontogenesis of the ear. This is the organ that specifically “sculptsµ the bipedal body. This is the only body capable of articulating linguistic sounds. Furthermore, it is known that the brain of homo habilis presents the Wernicke area in its development. This is a specifically auditory area. In fact, if we compare this with the fact that the cerebellum – normally in charge of sensory-motor integration that guarantees balance – is the other great protagonist of homo habilis cephalization, we can deduce that the hominization process has to dealing with the primacy of ear activity as an organ of balance and hearing. So we know the organ that holds the body upright and produces linguistic intelligence. We believe this may represent an important contribution to the theory of embodied cognition. 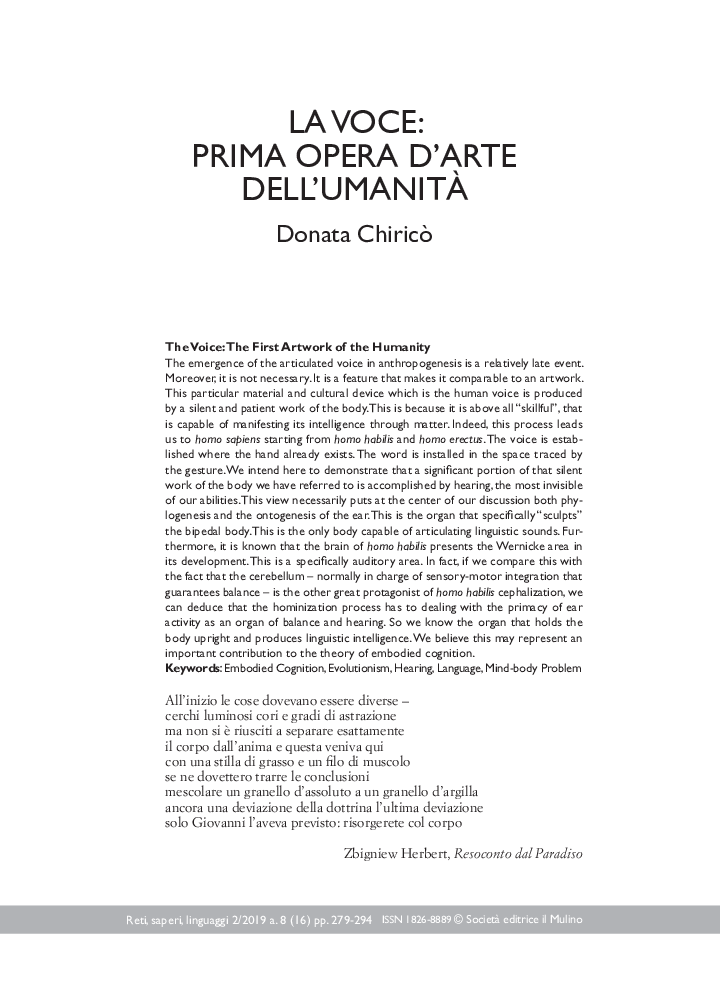