Keywords: Higher education policies, Italian universities and the pandemic, Next Generation EU Re- covery Plan, dynamics of change in HE, internal and external actors in HE.

In the HE sector, two different policy dynamics have simultaneously taken place during the pandemic. The first dynamics has been characterized by incremental change, mostly of a routine nature and carried on by internal actors. It has consisted of a series of relatively minor measures, presented as a response to the health and economic emergency, but prompted by a traditional vision of the problems of the university sector and its possible solutions. Their objective has been to improve the internal functioning of the HE system by ensuring greater financial resources and greater autonomy. The second dynamics, on the other hand, stems from a vision of the university and research system as a key factor in the transformation of the Italian economy into a more knowledge intensive system – a transformation made necessary by the deep economic crisis. The main actors in this dynamics have been external to the university system: namely, the national government and its networks of experts and consultants that have been in charge of drafting the various versions of the Italian recovery plan. In all these versions – from the first general proposals to the final, very detailed, draft of the PNRR presented to the European Commission – the university’s mission to provide highly educated human capital and useful knowledge to its socio-economic system becomes paramount and inspires some radical changes. In a sense, we may say that the pandemic and the ensuing economic crisis have been a «critical juncture»: besides fostering the participation of new actors in the HE policies, in fact, they have weakened the role of traditional actors and neutralized to some extent the entrenched veto powers. However, these two parallel responses will produce all their effects in the next few years, and it remains to be seen whether the two policy dynamics can be effectively integrated and whether the ambitious PNRR objectives will be implemented. 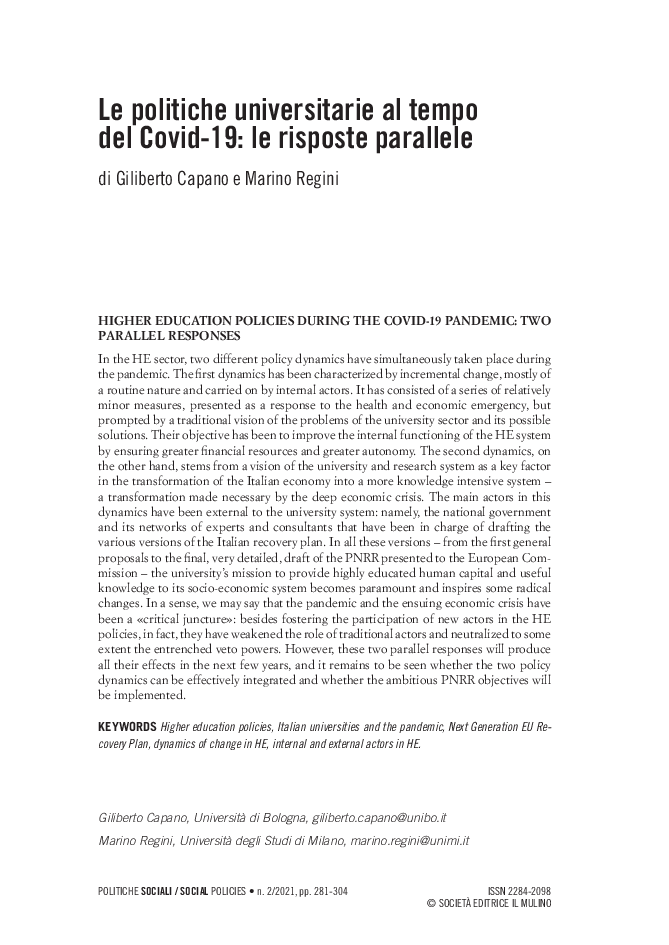