Extant empirical studies on the effectiveness of supplementary firm-level bargaining with respect to firm performance and innovation essentially focus on estimating five functions: the probability of adopting or having in place supplementary bargaining, and the impact of such agreements on, respectively, firm performance, employment, wages, and innovation. The review undertaken shows that the results of the various estimates are affected by a series of distortions, at times even cumulative, due to either i) the absence of endogeneity controls for some variables, ii) the use of unrepresentative samples, iii) omitted variables, iv) the lack of adequate temporal lags between contracts and outcomes, and finally, v) focusing exclusively (with some exceptions) on the premia aspects (so-called performance-related pay), thereby unduly reducing the entire contents of one or more supplementary bargaining agreements into a dichotomous variable, ignoring the variety, the different numerosity, and the intensity of the matters covered. Then, if one adds that non-pecuniary incentives, social preferences, and possible crowding-out effects are largely ignored, and that evidence of the relative efficiency of the various incentives employed is absent, what emerges is a picture of limited, vague, and unreliable knowledge of the role that supplementary firm-level bargaining has limited, vague, and unreliable knowledge of the role of supplementary firm-level bargaining on the dynamics of firm development and the economic system in general, leaving policy makers - who, amongst other things, dedicate considerable public resources to disseminating decentralised bargaining - without appropriate indications on the causal links between contracts and outcomes. 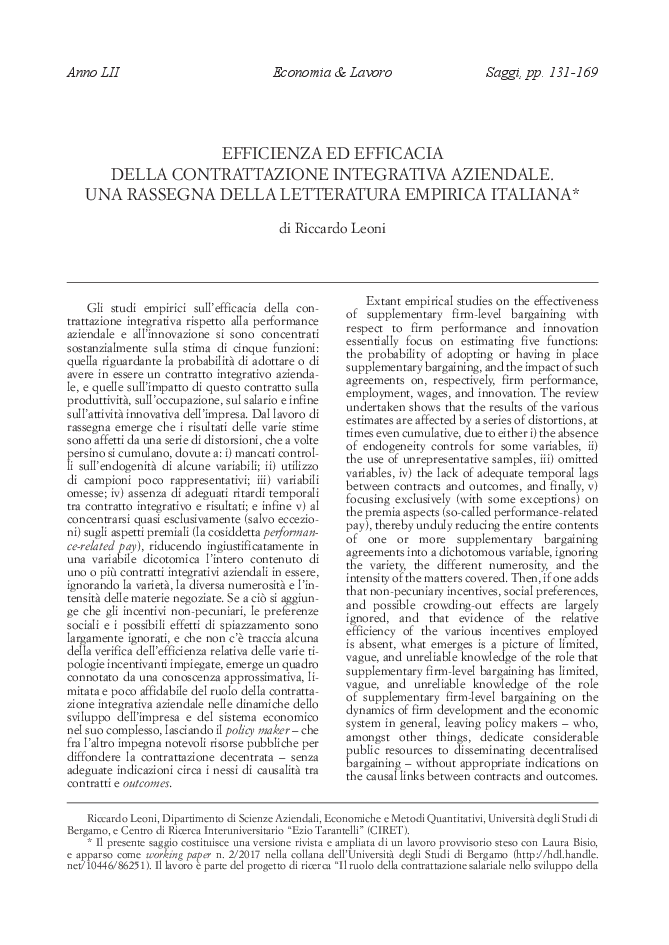