In 1977 the manuscript of "Carcere e fabbrica: alle origini del sistema penitenziario" was published in Italian (Melossi and Pavarini, 1977). Four years later, Macmillan published an English translation, "The Prison and the Factory". Palgrave-Macmillan is now publishing a second edition of that book, exactly 40 years since the original publication. The present article is an Italian version of the Introduction to such a new edition. In it, the author insists on the original intention of the volume, that, by applying a Marxist reading to prison history materials, tried to show how the very "invention" of the prison, was tightly linked to what Marx, in the first volume of "Capital", calls "original" or "primitive" accumulation. Furthermore, in the centuries that followed, the very logic of primitive accumulation would be reproduced and expanded through the incessant conquest and colonization of pre-capitalist areas of society, by virtue of the crucial requirement of "discipline". Notwithstanding, the book has often been read as if it had been a story about the invention of the prison as some kind of "school" for an apprentice working-class - confusing our thesis, I surmise, with penological visions on rehabilitation/resocialisation/re-education by means of work. Even if, at times, prisons might indeed have looked a bit like such schools or vocational institutes, this is certainly not what we meant. Through the following very synthetic reconstruction of the genesis of the book, as well as of some of its aftermath, I try to show why I have always been quite unhappy with such a (wrong) reading of "Carcere e fabbrica". 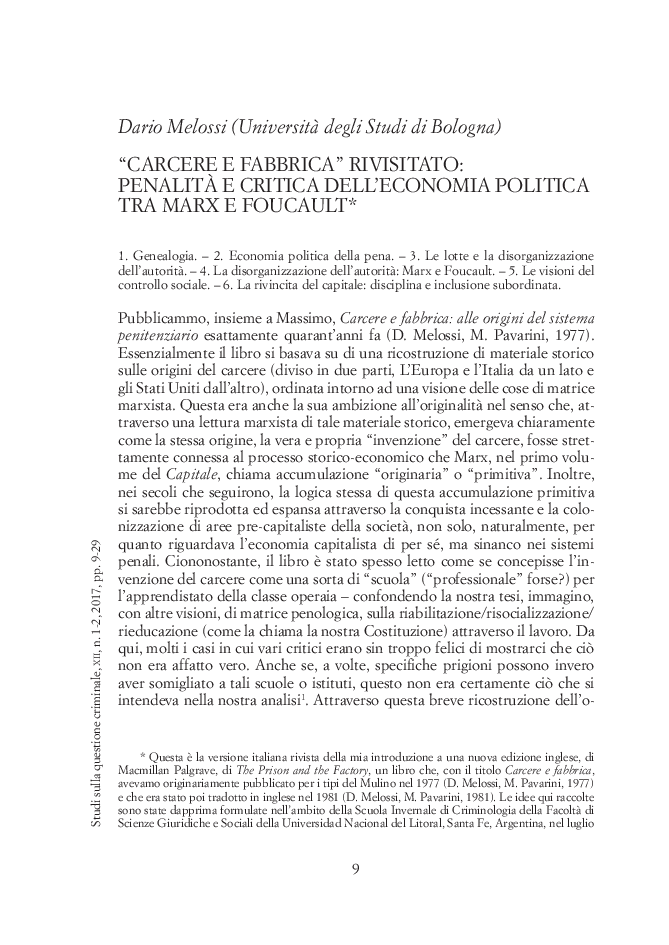