The (ir)resistible rise to power of the far right represented by Jair Bolsonaro takes place in the context of an institutional coup promoted by conservative forces, which happen in stages of traumatic form: “spontaneousµ demonstrations of 2013, impeachment of Dilma and coming into office of Temer government in 2016, President Lula’s prison in 2018 realized by judge Sergio Moro in Operation Lavajato (lawfare) and Bolsonaro’s victory and election in 2019. The question is: is it an alternation of government (albeit with anomalies), or a change of political regime? The article examines the two hypotheses that are still open in the fluid Brazilian political situation. Worrying signs lean towards the second hypotheses: the ideological war against the “enemyµ to be destroyed and the attack on human rights, the militarization of the government, the connivance and contiguity of the government with the milicias that control the territory, religious fundamentalism, especially neo-Pentecostal that makes an unscrupulous use of religion for political ends, the increasing police violence encouraged by the expansion of legitimate defence, the neoliberal policies that weaken the action of the State in the social and environmental area. All signs of a safeguarded democracy which must endure the daily wear and tear of the government’s subversive action. 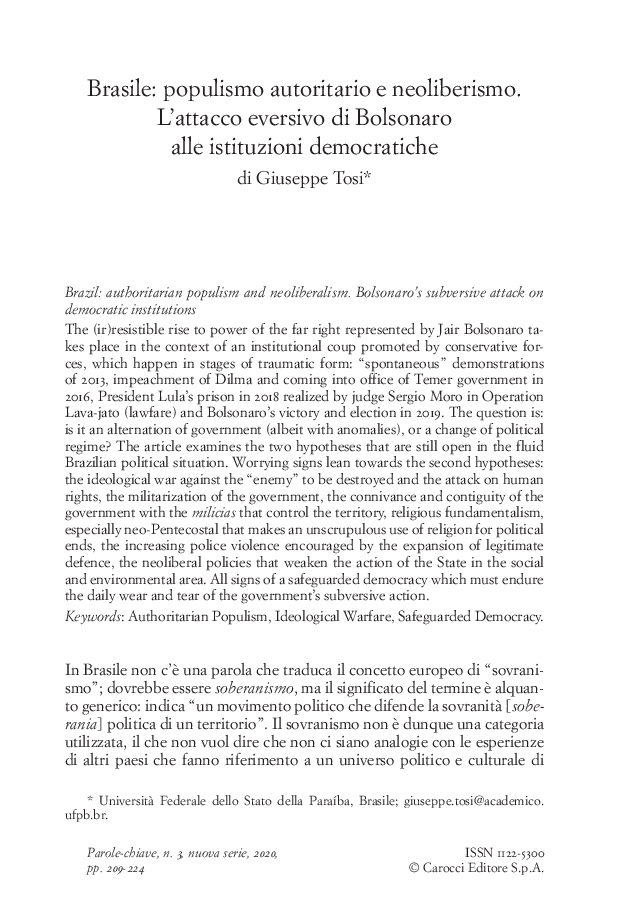