This essay attempts to survey Luisa Mangoni's particular brand of history of culture by focusing on three broad and intertwined topics whose relevance has been seen mainly in scattered journal essays and books chapters, while also considering the main books inthe background ("L'interventismo della cultura", "Una crisi fine secolo", "In partibus infidelium", with the sole exception of Pensare i libri). The first topic is Mangoni's own reflection on the work of fellow historians of culture, such as Delio Cantimori or Leone Ginzburg, from which a main theme in Mangoni's views starting from the very beginning of her studies can be drawn: that the efforts to achieve philological precision in the analysis and interpretation of texts, by connecting them to the historical context, ought to be intended as a form of commitment, albeit unaffected by ideological motives. The second topic is her conception of culture as a highly characterized field of knowledge, in which pressing social and political questions are reflected, and which produces very pertinent answers to them. Mangoni's reading of Antonio Gramsci is to be seen in this perspective: conveyed in four essays, they point out the central importance of the State in Gramsci's meditation of Fascism after 1929. Also to be considered from this perspective - and this is the third topic - are Mangoni's essays on Italian juridical culture during the 1920s and 1930s, where she was able to prove how even in a very technical field like the law, jurists were considering the causes and effects of the crisis of the State, and the transformations it was undergoing through the Fascist regime. 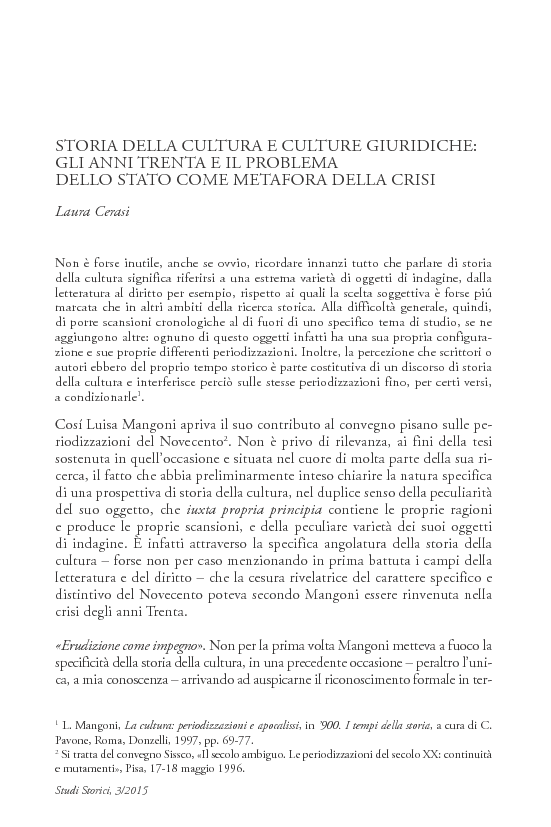