In the middle of the fifteenth century, Bessarion came to symbolize the defence of Byzantine culture and the struggle against the Ottomans, devoting himself to overcoming Christian divisions and to gaining Westerners' essential support. Above all, although aware of Venice's paramount interest in its own overseas trade, he was persuaded of the "Serenissima" 's key role in the anti-Turkish war. He was supported by a group of Venetian humanist patricians, who favoured armed intervention in the East. In this essay, I study Bessarion's propaganda strategy. On the one hand, he invoked God's protection and the renewal of classical values, while on the other he urged gaining knowledge of the enemy, and military reaction. Therefore, he used relics, especially of Eastern provenance, and solemn ceremonies, to increase the Papacy's prestige and to urge anti-Ottoman action, as well as several "exempla" of the classical past, such as Demosthenes' call for concord among Greek nations against the Macedonian invasion. In the same way, Bessarion called Westerners, in his "Orationes ad principes Italiae", to unite against the common foe, pointing first - in the current view - to its undeniable strength and the necessity to fight it, and in the end reassessing the Turks in objective reality. 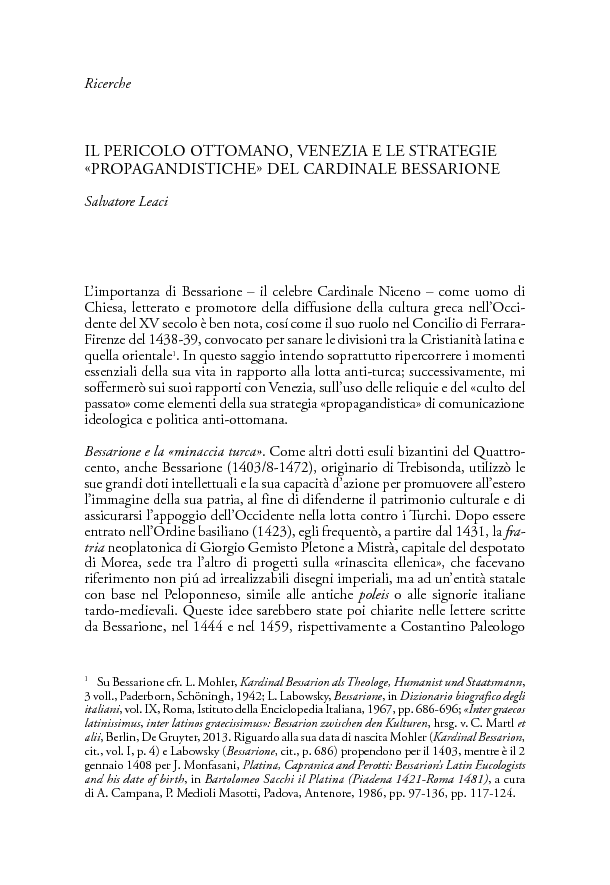