Hobsbawm regarded Marxism as a research programme meant to investigate events such as the social structure of society "revolutionized", the role of productivity, the relation between classes and the wider economy, the international division of labour. Even in early works he examines everything comparatively and counter-factually. The entire planet becomes his laboratory. Thus, in the "Age of Capital", he held the view that what "really" enabled the process of industrialization was the introduction in the first half of the 19th century of the railway, the steamer and telegraph which increased the potential size of the capitalist world. Note the centrality not of the class struggle or ideology, but of technological innovations or the central role of natural resources such as coal. Hobsbawm's capitalism thrives in a world which is increasingly unified and interdependent. The hallmark of this capitalism is insecurity and anxiety. The workers were rarely distant from the insecurity of dismal poverty. An accident at work would instantly project the worker into abject poverty. But the bourgeoisie too was anxious, and rightly so: the industrial revolution which was sweeping throughout Europe and North America was bringing about an unparalleled upheaval in social structure. Hosbabwm's capitalism is never a pure market mechanism, a machine for growth. The pages in which he describes the world of the bourgeoisie are masterpieces of social history. The belief that capitalism requires non-market relations pervaded his entire work. Capitalism relied on factors which have no intrinsic connection with the pursuit of individual advantage such as the "pride of achievement", the custom of mutual trust, but also the habits of obedience and loyalty. In other words, he wrote "capitalism has succeeded because it was not just capitalist". 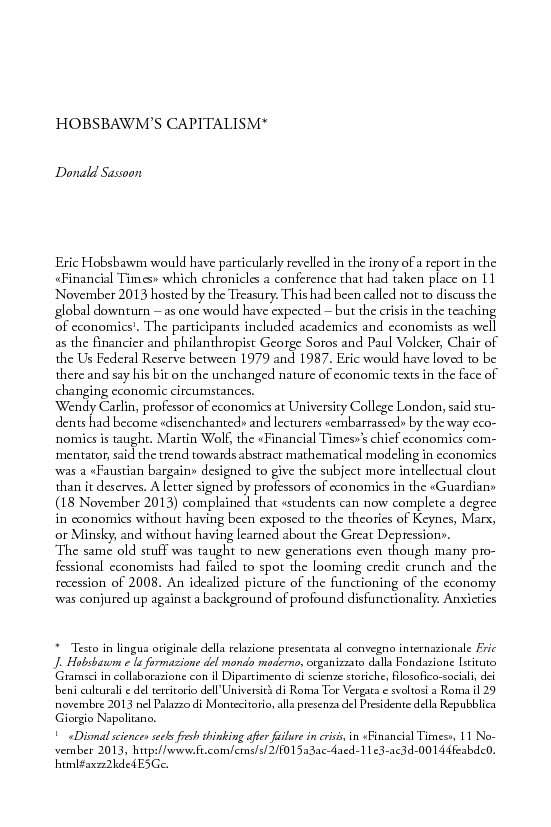