Despite the many differences that characterize their respective work, intellectual profile, and political attitudes, when it comes to international politics Machiavelli and Guicciardini share a number of insights. First, they both conceptualize the external realm as something more unstable, unpredictable and dangerous than the domestic realm. Since such an environment is ruled above all by force, if a state is not militarily strong even the best constitution can be of no help. The external environment, thus, exerts a powerful pressure upon domestic affairs: it is in the name of external threats that, for example, Machiavelli recommends the selection of a fertile site and the adoption of a popular form of government when a new city is founded, and Guicciardini suggests that foreign affairs should be handled by a selected group of citizens – the Senate, that lies at the core of the constitutional reforms he has in mind. Second, both Florentines attach great importance to security in their reflections on foreign policy: Machiavelli thinks in terms of “ambitionµ and “fearµ as the main motives of state action, and seems to believe that the latter is usually decisive; Guicciardini puts forward a tripartite scheme of foreign policy goals structured around “securityµ, “reputationµ and “profitµ, in which security often plays a central role. Such an emphasis on security, in addition, leads them both to explain and justify not only defensive measures but also aggressive initiatives and expansionism. Third, both Machiavelli and Guicciardini trace back the differences in foreign policy style, among states, to domestic attributes. Although they both argue that, in general terms, states behave in a similar way in their interactions, independently of their internal political arrangement, at one point their views diverge. Machiavelli has a nuanced opinion of the strengths and weaknesses of popular republics; yet, he certainly believes that they are perfectly equipped to do well on the international stage. Such a view is utterly rejected by Guicciardini, as he underlines a long list of flaws that affect democratic foreign policy. 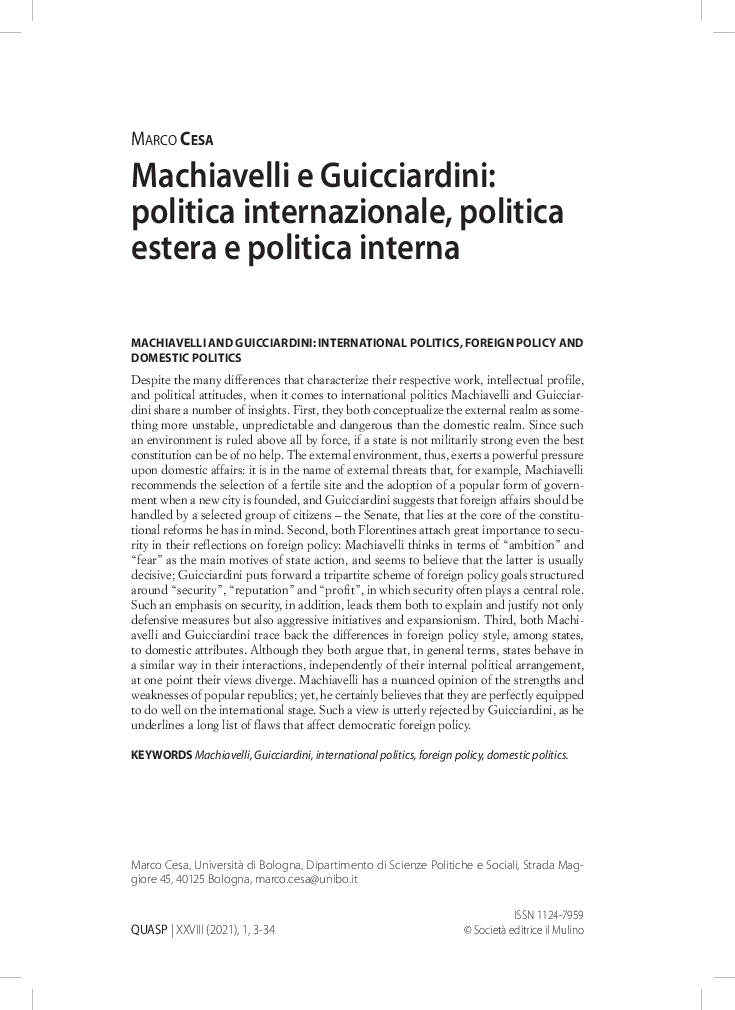