This paper proposes a new interpretation of Etienne de La Boétie’s Discours de la servitude volontaire. Starting from the image of voluntary servitude as a collective enchantment that appears at the beginning of the treatise, the paper explores the transformation that the notion of enchanter undergoes in the early 16th century. The different contexts that this image allows us to identify, indicate that the Discours is inscribed, in an original way, in the long medical tradition on the power of enchantments. By recognising in the «One» the qualities of the enchanter, La Boétie gives the enchantment a political value and identifies in the relationship enchanter/enchanted the key to an unprecedented pact of subordination. In this variation of scale, the enchantment as a political phenomenon occurs when the leader proves capable of performing credible prodigies. This reconstruction accords a central role to the figure of the thaumaturge leader, whose characteristics are defined by Machiavelli and Pomponazzi. In a reading history perspective, the article explores the relationship La Boétie establishes with Machiavelli and Pomponazzi. The article concludes with a comparison between the thaumaturgical paradigm and the charismatic paradigm, Marc Bloch and Max Weber 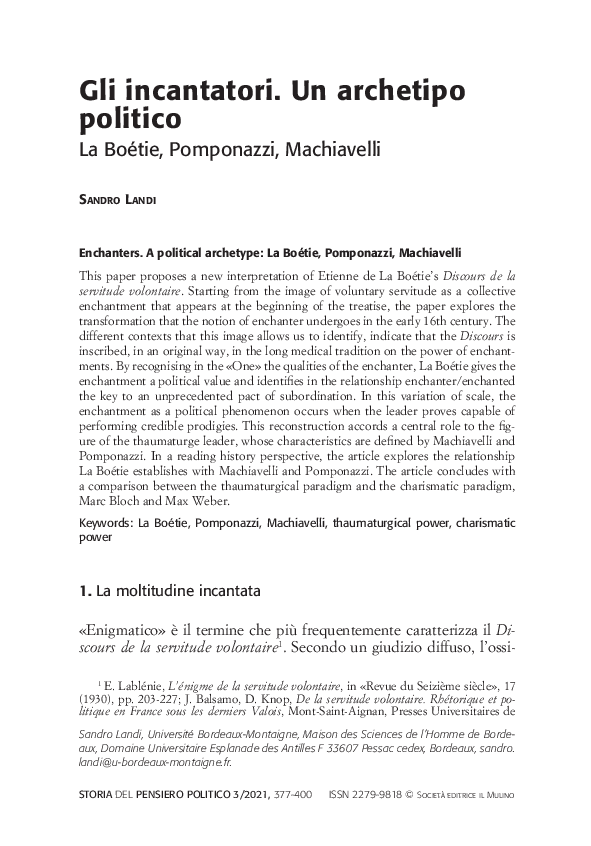