The legal subject is one of the most powerful creations of modern law, namely of that stage of legal science that develops in the second part of the XIX century and is named, following Duncan Kennedy’s classification, Classical Legal Thought. In its theoretical foundation, the notion of legal subject has lasted almost unchanged even through the second globalization – which characterizes the first part of the XX century till the early Seventies and is marked by the dominance of the social thought. In this article I argue that the idea of the legal subject has now come to an end or, at least, it is undergoing dramatic changes that will deeply transform its scope and meaning. In the current stage of globalization, the third, the subject is no longer a universalistic and transversal figure. Rather it is fragmented in multiple identities which not only refer to gender, sexuality, ethnicity, religion, etc. but also to age (minors, elderly) or contingent situations (consumers, ill persons). As a matter of fact, each identity/subject is provided with its own set of human rights and sheltered by specific antidiscrimination rules, which ultimately infringe the universality of the legal subject. This essay is an attempt to highlight and investigate, firstly, the epiphanies of the crisis of the legal subject in new constitutions, bills of rights and continental civil codes, such as the BGB and the Code civil as recently reformed. Secondly the different projects that this transformation triggers as possible ways to rethink (or escape) a legal category in decline. 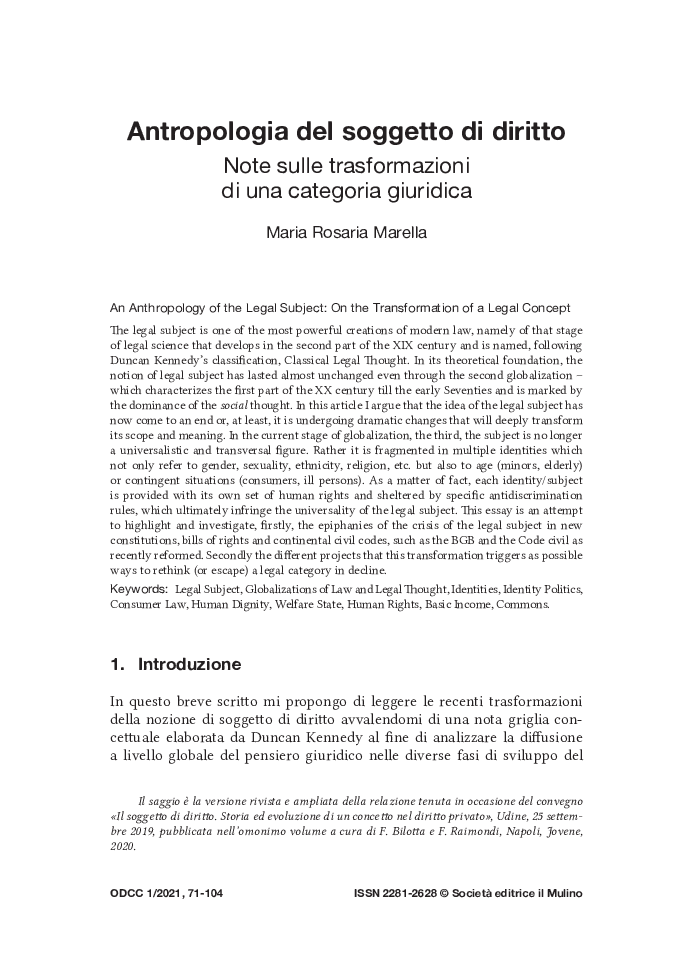