Karl Polanyi’s theory deals with the general traits of capitalist society. His holistic and institutional-historical approach avails itself of a wide-ranging comparative analysis. This implies a criticism of classical economists’ naturalism as well as of the individualistic, ‘formal’ and deductive neoclassical method. In Polanyi’s vision, market society is a peculiarly ‘economic’ society, since its fundamental institutions – the market system and capitalist relations of production – are specifically and exclusively economic. Thus, the economy acquires an unprecedented autonomous and dominant “placeµ in the social system. Polanyi builds on this theoretical basis the possibility of 1) raising the vital, topical problem of the relationship of the economic system and the social system as a whole with their human and natural environment; and 2) analysing the history of contemporary society. A reason of current wide interest in Polanyi’s The Great Transformation may be that this book carries on a vision of the origin, development and final crisis of nineteenth-century liberal society, and of the following “transformationµ, which is radically opposed to neoliberal theoretical and political approach. Polanyi’s anti-neoliberal attitude is particularly evident in his conception of ‘positive’ freedom, on which his political philosophy is grounded, and in his early acknowledgement of the erosion of democracy inherent in the neoliberal tendency to adapt politics and all aspects of social life to the needs of the dominant economic powers. 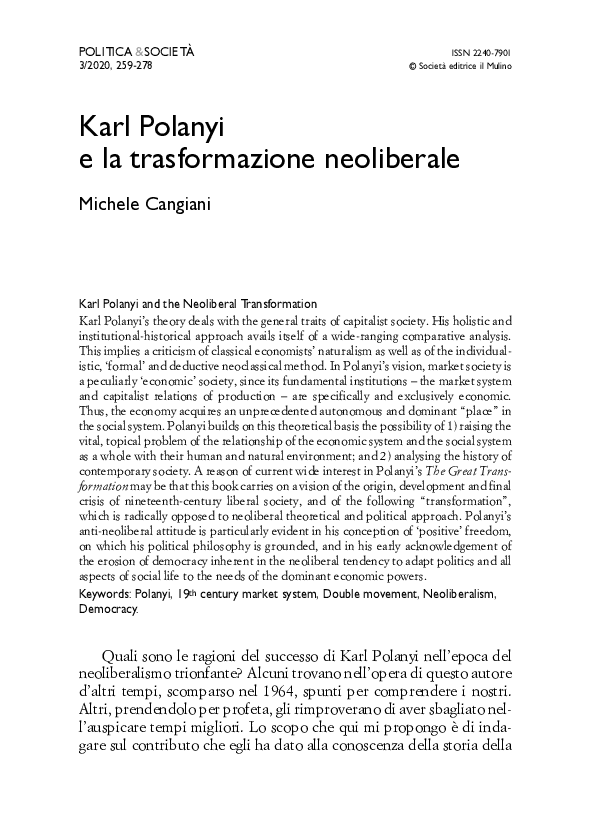