This article deals with Speculative Realism. After defining the positions of Graham Harman, Ray Brassier and Quentin Meillassoux – who, along with Iain Hamilton Grant, were its godfathers when this philosophical perspective was baptized at Goldsmiths College in 2007 – it examines them in relation to the question of negativity. More precisely, it claims that this type of realism, while reworking the main thesis of traditional realism as regards mind-independent reality, cannot give an adequate account of that negativity, even though it seeks to draw on it. And so, just as traditional realism could not think of negativity as not external, in its capacity as the difference between reality and its representation, so Speculative Realism cannot conceive of a negativity that penetrates into the being. The tension between realism and nihilism, between realism and the affirmation of nothingness as the initial horizon of Being, leads, rather overturning negativity into its opposite – into Being and determinacy. To solve this problem, Speculative Realism could have benefited from the lesson the modern dialectical thought had developed along Hegel’s and Marx’s trajectory. This could have taught Speculative Realism to think of negativity as Ursprung, as a conceptual foundation, rather than as Anfang, a temporal beginning. The development of the self-referential character of negativity, as is shown both by the transition from the doctrine of Being to that of Essence in the Science of Logic, and that of commodity to value in Capital, prevents any conceptual hypostatization. 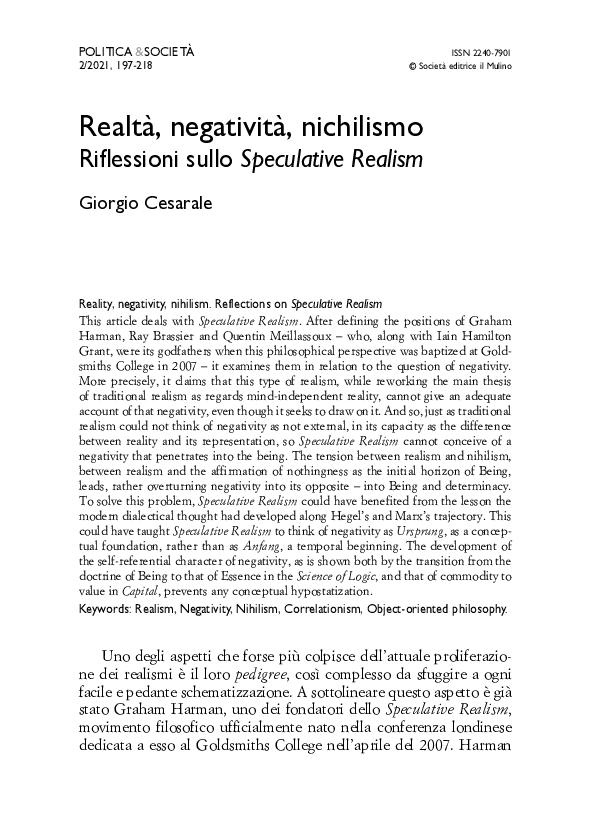